In this lesson we'll learn how the electricity lighting up our gadgets flows through wires from batteries.

My friend Pete built this amazing Jacob's ladder that we'll use to start off the lesson. The arc of light traveling up the Jacob's ladder is ionized air, just like in a lightning bolt. Electricity flowing from one wire to the other causes the air itself to emit light.

The students will grapple with the flow of electricity hands on by making an LED light up. Here's the battery connected to the LED to make it glow. 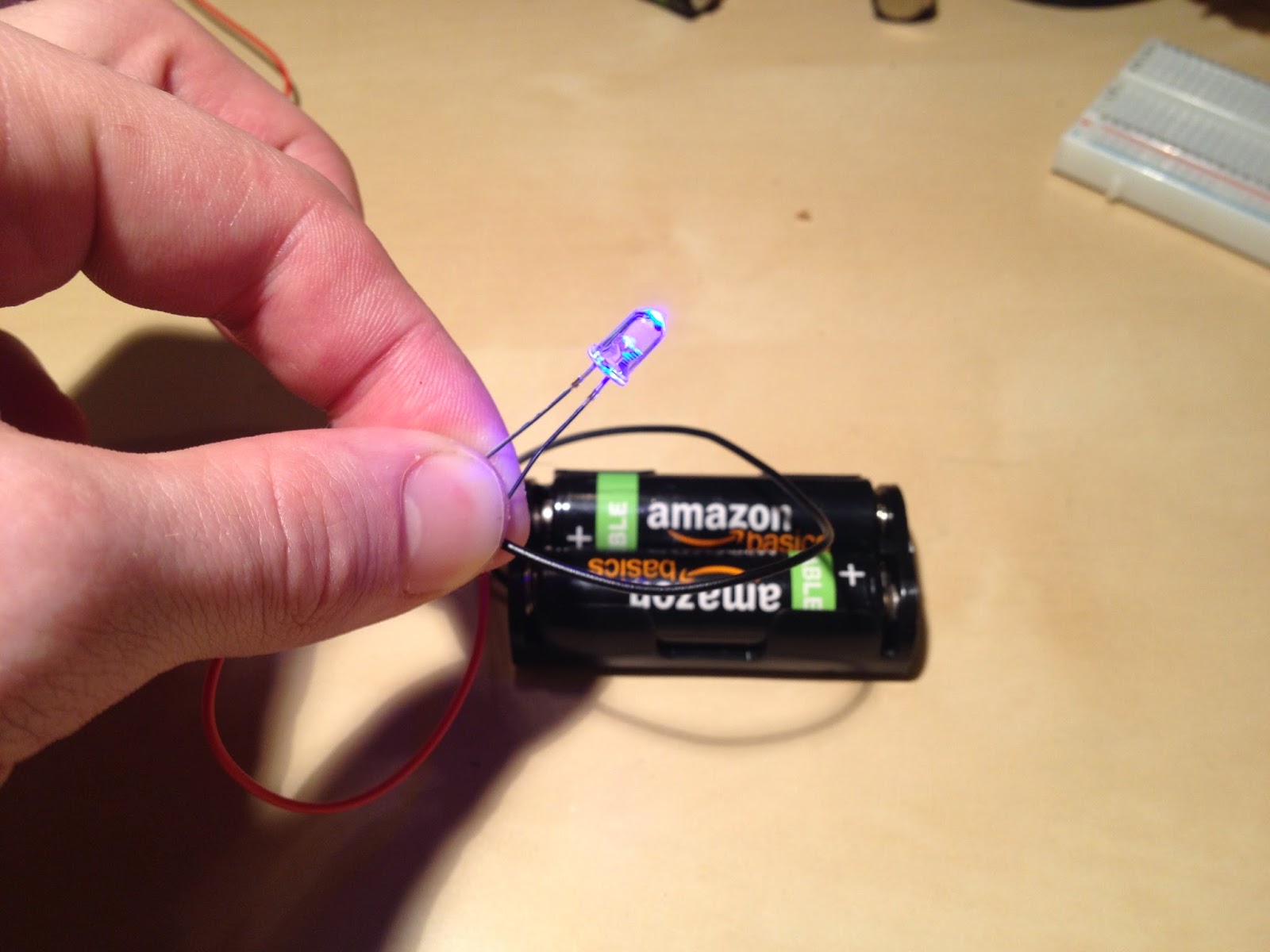 Electricity flows out of the battery and into the material in the LED. That material is specially designed so that when electricity tries to pass through it, the material glows. This is kind of like the air in the Jacob's ladder lighting up

Getting started with circuits

Next, we move on to building our own simple circuits that light up. The first component, the breadboard, is where all of the electronics construction takes place. You use the breadboard to connect circuit components together. 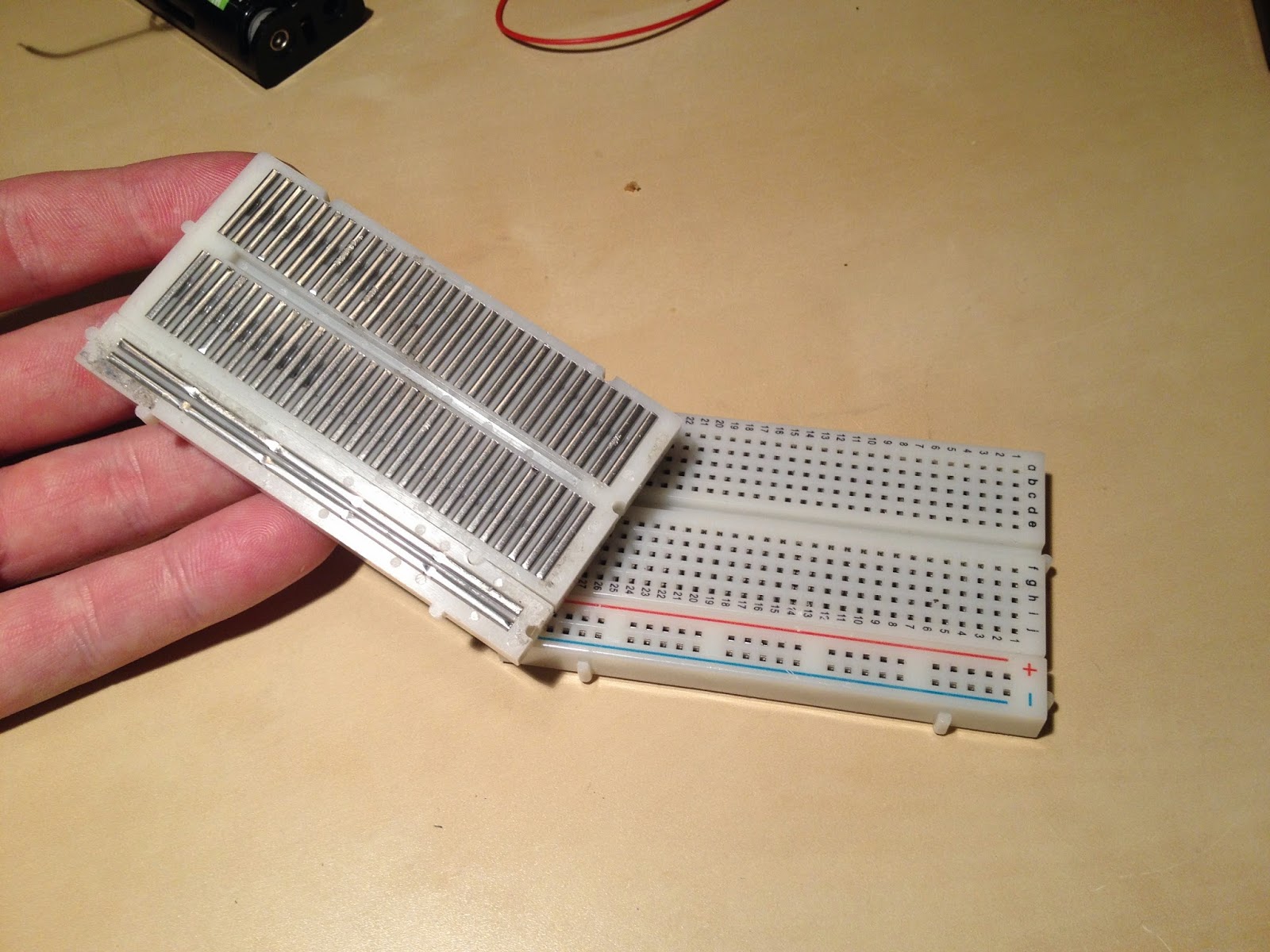 This breadboard has the back removed so you can see the way all of the holes are connected on the reverse side. On the outsides, the plus and minus holes are all connected. In the center, the numbered rows are connected. Plugging into a connected hole is just like touching those to wires together directly. 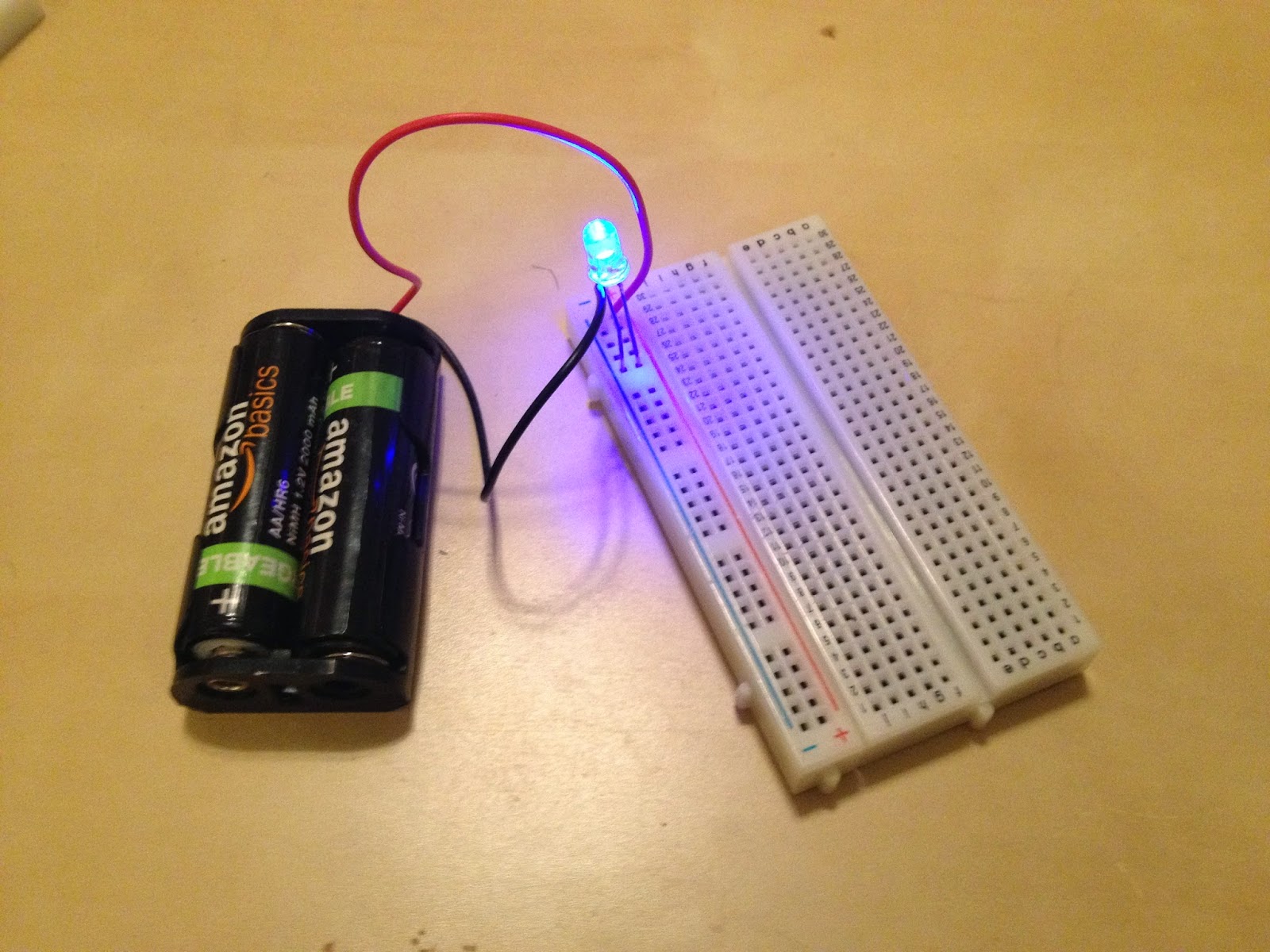 Next, insert the long wire of a clear LED into the plus terminal, and insert the short wire into the minus terminal. The LED should light up. If it doesn't try reversing the ends. Remember that the longer wire should stick into the plus side. This is because the LED only lets the electricity flow in one direction.

We can draw the flow of electricity from the battery into the LED and then back into the other end of the battery. This is called a circuit diagram, and it helps us to picture how the circuit works and how to modify it to make new things. 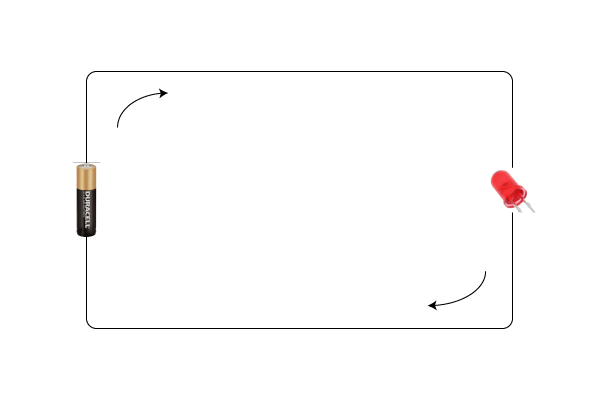 Electricity leaves one end of the battery and tries to get back to the other end. On its way around, the electricity flows out of the battery on the left and into the LED on the right. Then it leaves the LED and continues around the rest of the loop. 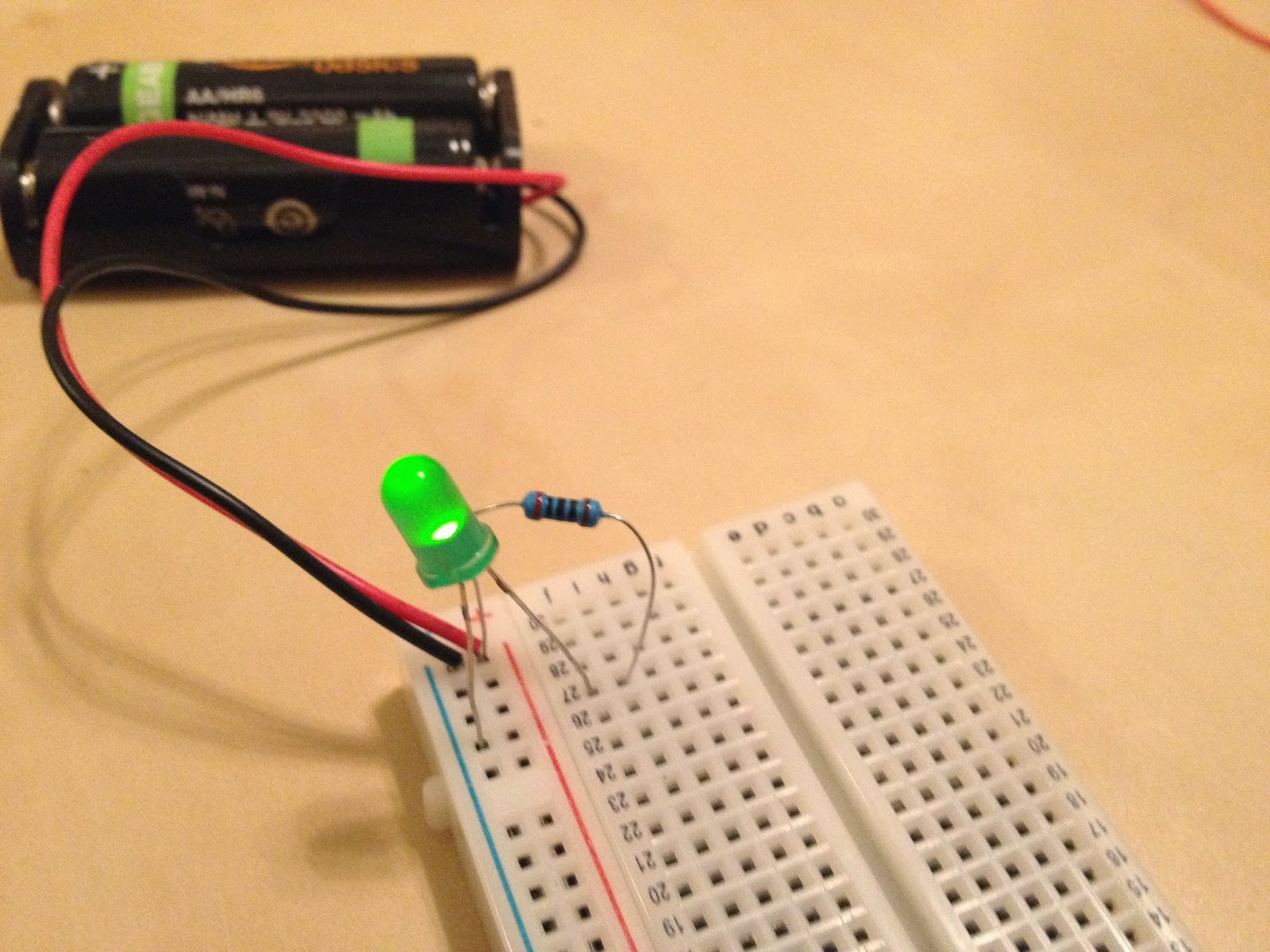 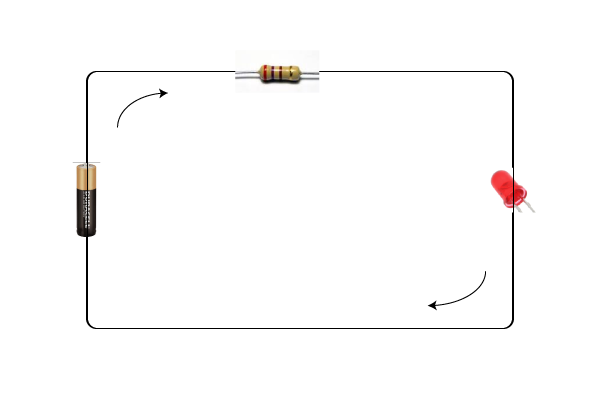 Two LEDs side by side

If we want to power multiple LEDs at once, we can put them both into the circuit next to each other. Make sure that the long ends are both connected to the resistor and that the short ends are connected to the minus end of the battery. This is called putting the LEDs in parallel. You can try putting one LED after the next (in series), but that keeps the battery from being able to light them. 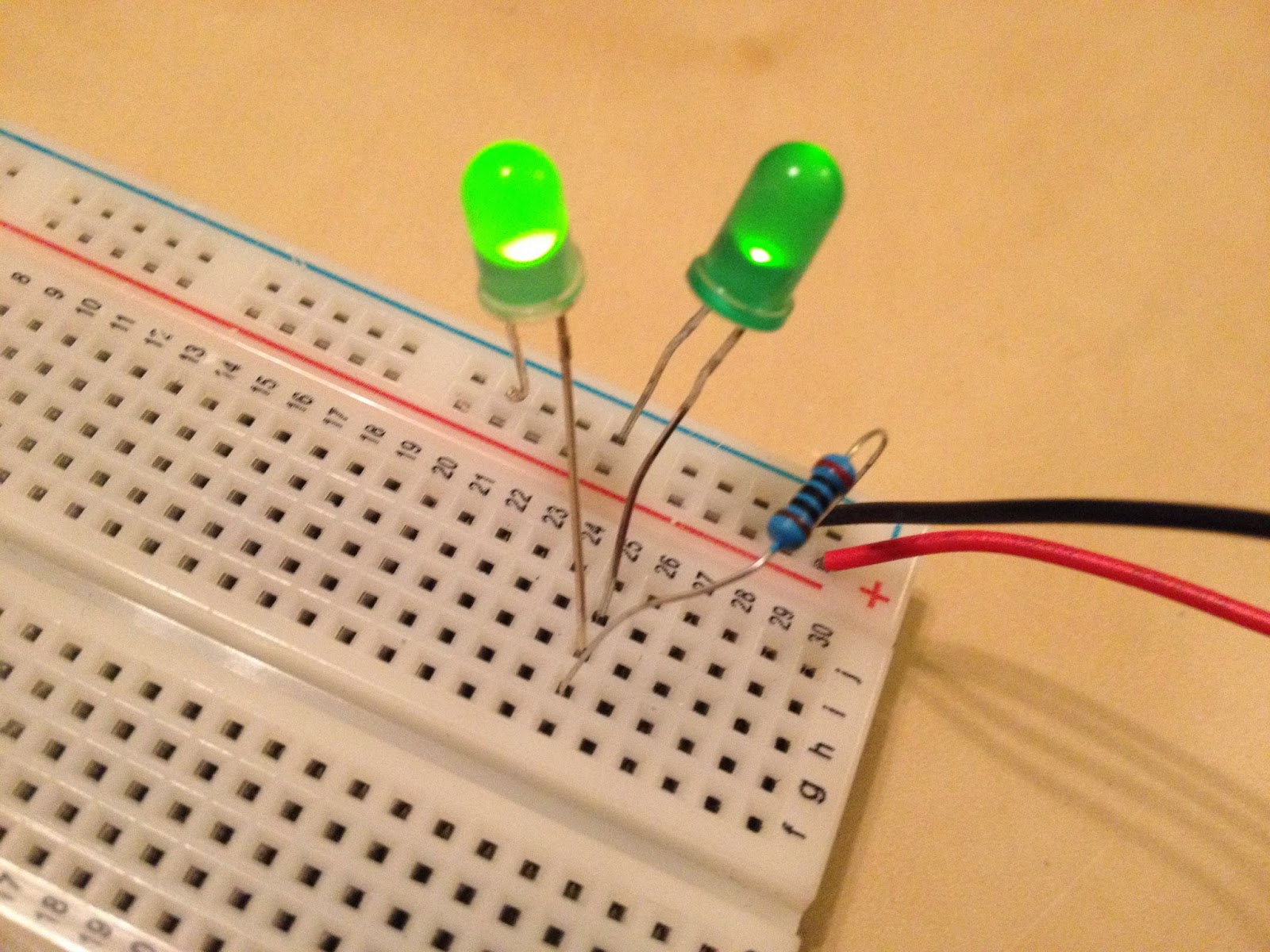 Now we can redraw this circuit just like before. 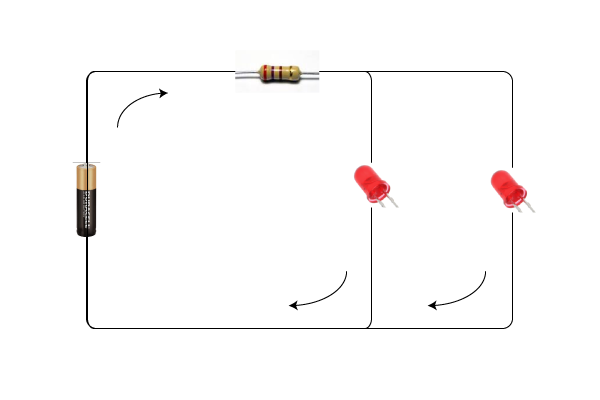 As a quick test, let's ask what would happen if we unplugged one LED from the two LED circuit. Will the other LED still work? If we go back to the circuit diagram we see that electricity can still flow through the other LED even if the first one is removed. Try it out to see what happens.

To end the lesson, let's try to play a game. This game will give us practice building LED circuits.

As you go, try making the circuits more modular so you can modify them quicker. Try to incorporate simple switches so that you can change the setup faster too.