My friend had really been wanting to build his own green wall in his back yard in the Mission in SF. So this winter, we took a weekend, planned it out, and built it. Here's the haphazard, meandering process we went through.

We didn't really know what we could pull off on this project. We started by mapping out a few sketches. 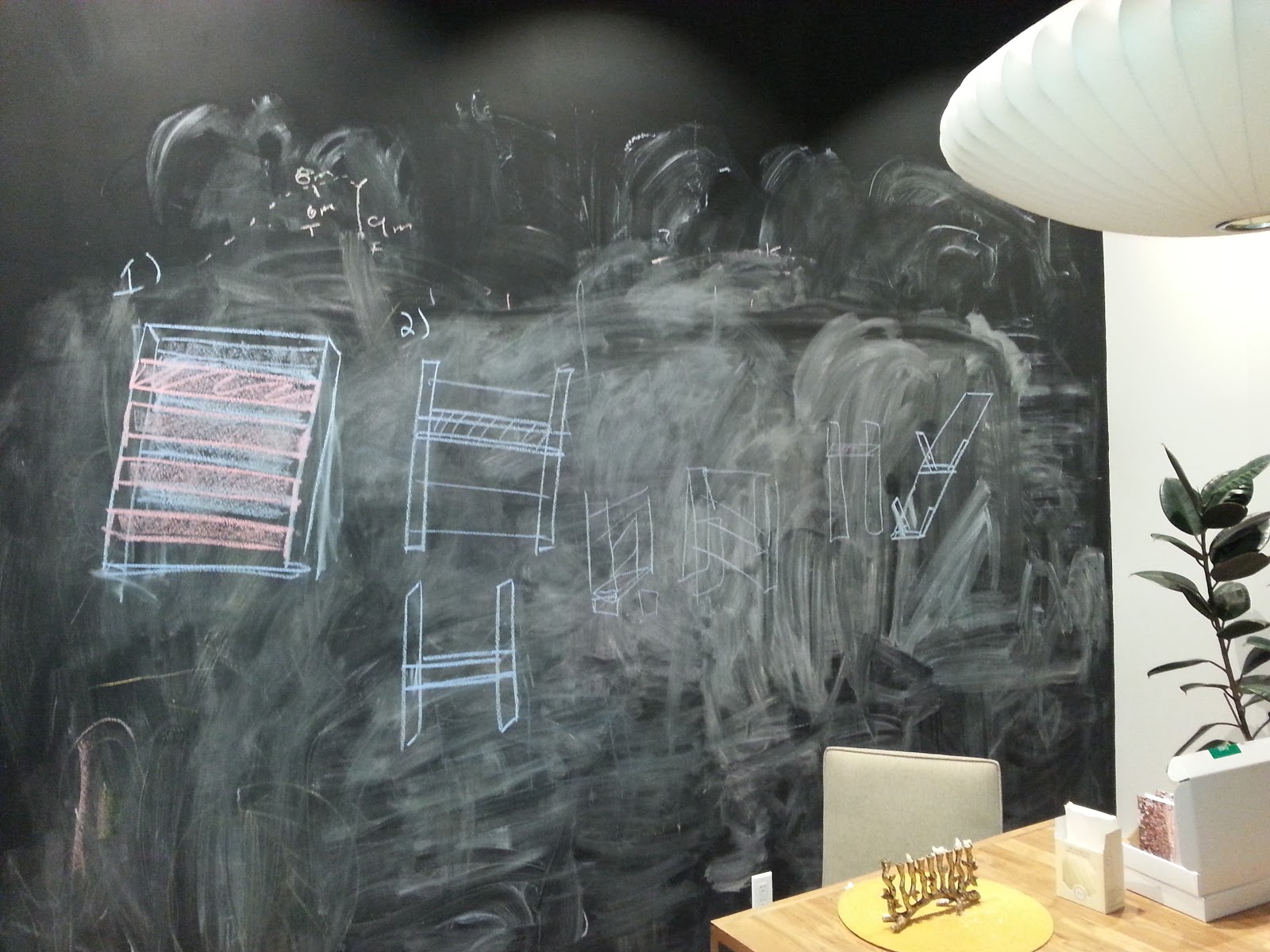 Although the "floating boxes effect" seemed really cool, we ultimately figured it'd be too tough to implement. We also toyed with doing almost closed sides sort of like a moving pallet, but thought it might be too much wood and look too shabby if it were reclaimed material. We went with a basic shelf-trough sort of design instead.

I grabbed a few native plants from the nursery at the Presidio after a planting day, which we assumed would be generally resilient to weather in the area. The backyard area wasn't going to be getting much light so I picked a some strawberries that the Presidio naturalist had selected for a shadier area. 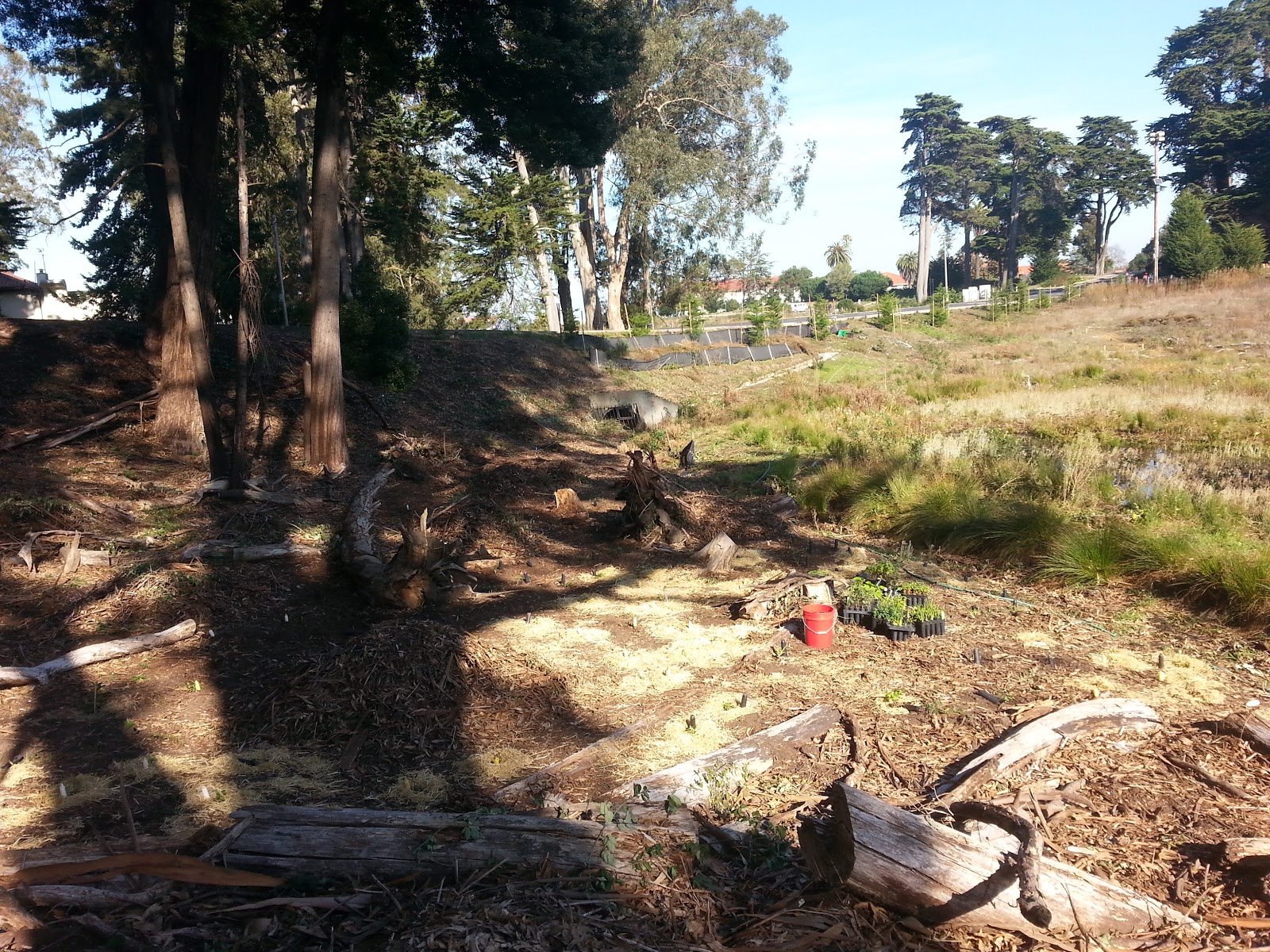 With a rough plan in hand, we started stitching things together. We dug out the post holes to be filled with 4x4 posts and dropped them in to size approximately. 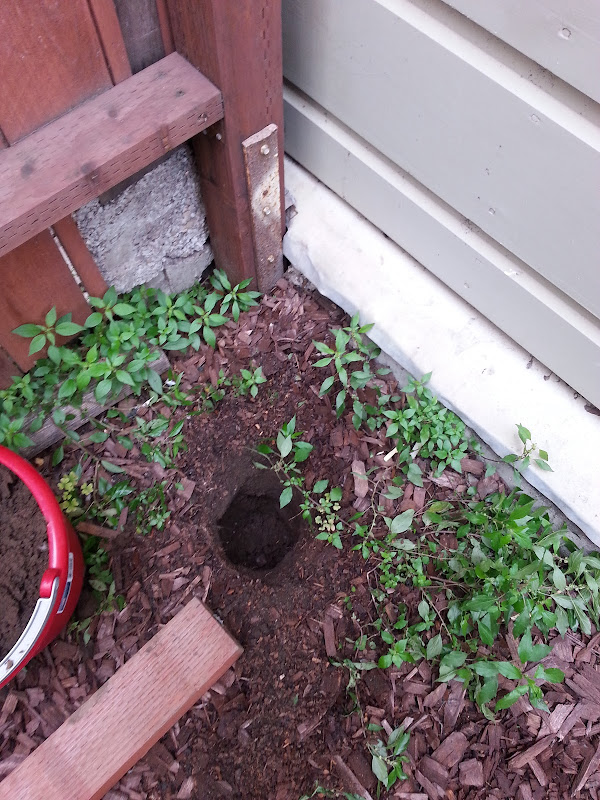 We did the entire project without any power tools. Here is Sam sawing away. I found it pretty exhausting. I think we needed about 12 cuts, but we obviously ended up doing a lot more. Fortunately, all the cut surfaces were interior. 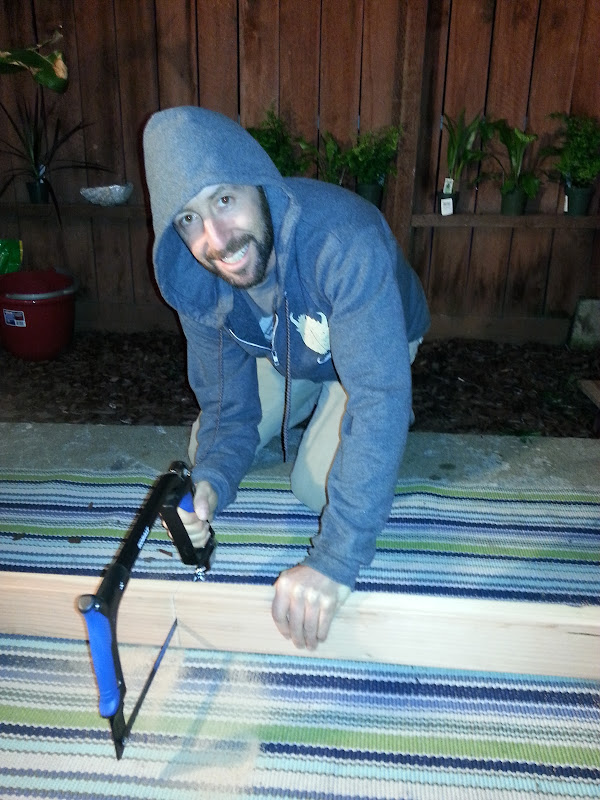 During planning, we didn't think about how flimsy the connections were going to be between the posts and the bottom 2x4 of the shelves. Fortunately, the interior of the shelves would be filled with dirt and wouldn't be visible so we could add some ugly reinforcements to the corner of the shelves on the inside. 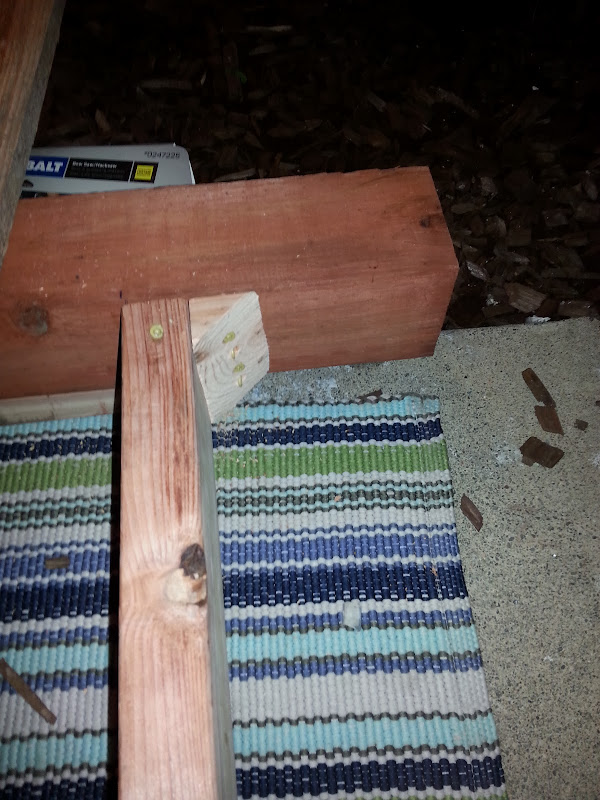 That made the frame much more sturdy so we could afford to move it around without fear of completely tearing out the ends of the 2x4s.

We assembled 3 shelves straight across for simplicity and structural support. /p> 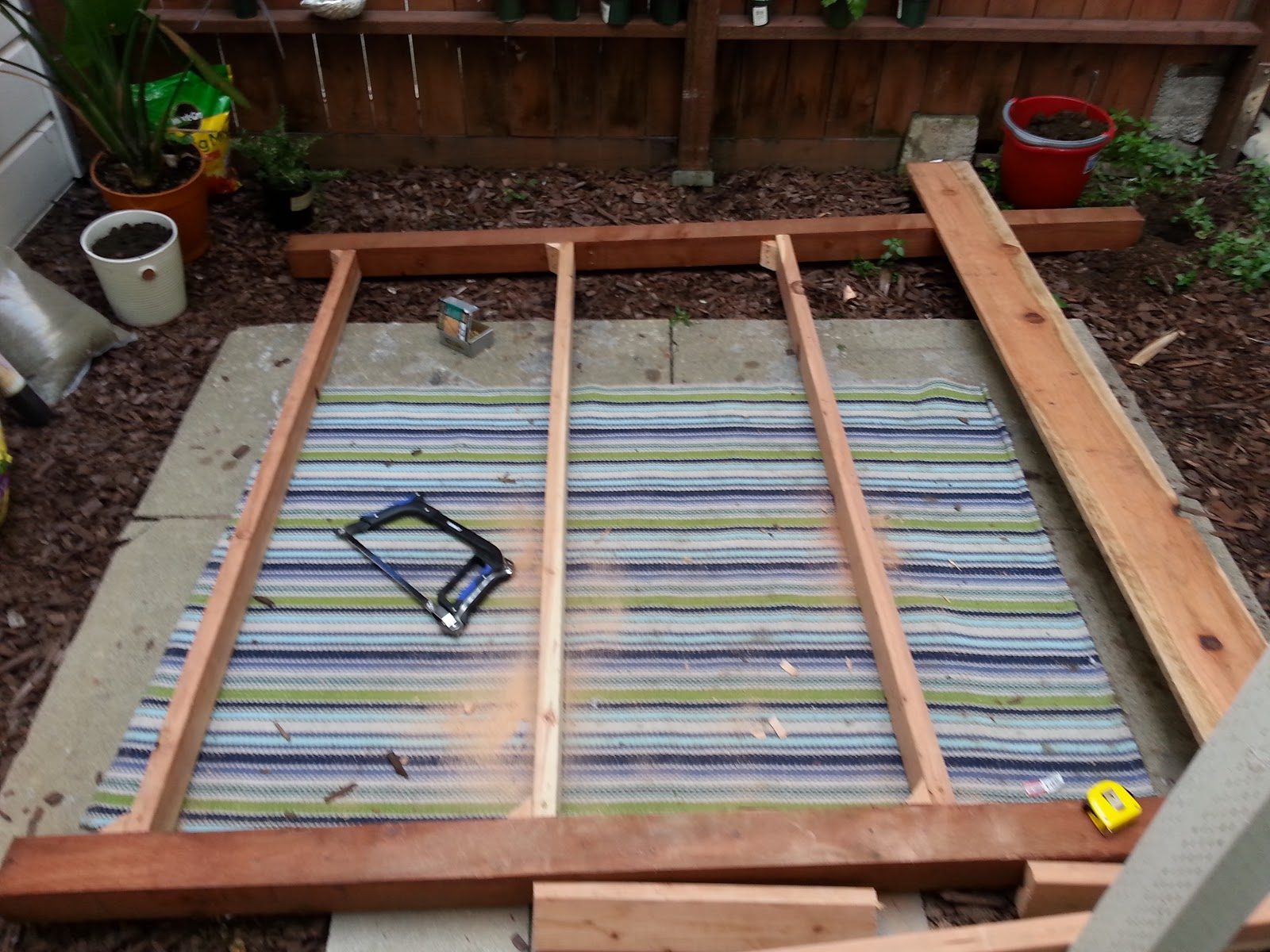 After the frame was assembled we finished out the post holes (using a spoon!) and dropped the frame inside. Well, we almost did. Except that we were off by about a half inch and ran into a sliver of foundation concrete. We chipped it back so the posts could just slide in. 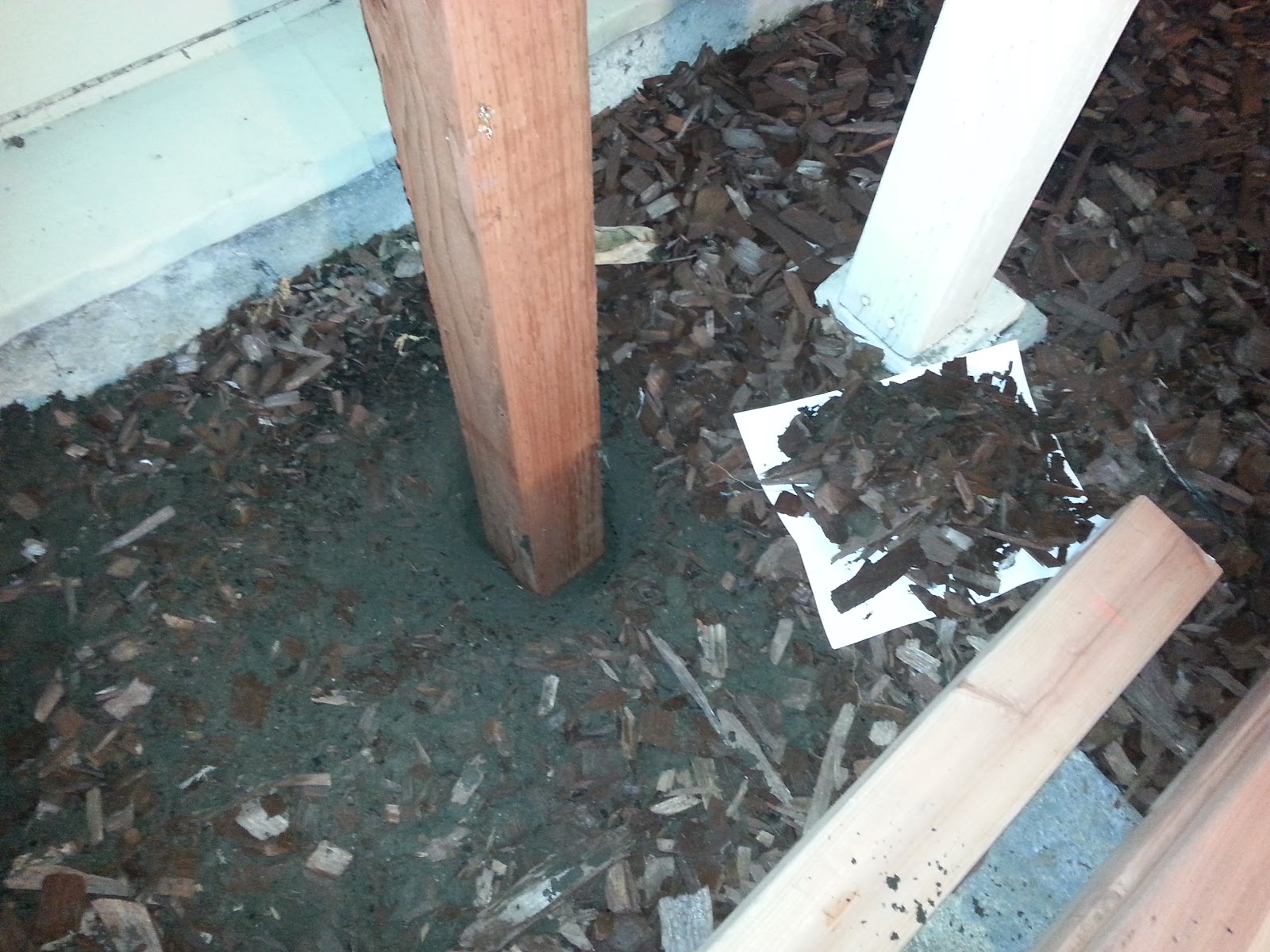 Finally, we started screwing the redwood slats onto the outside to make the soil troughs. 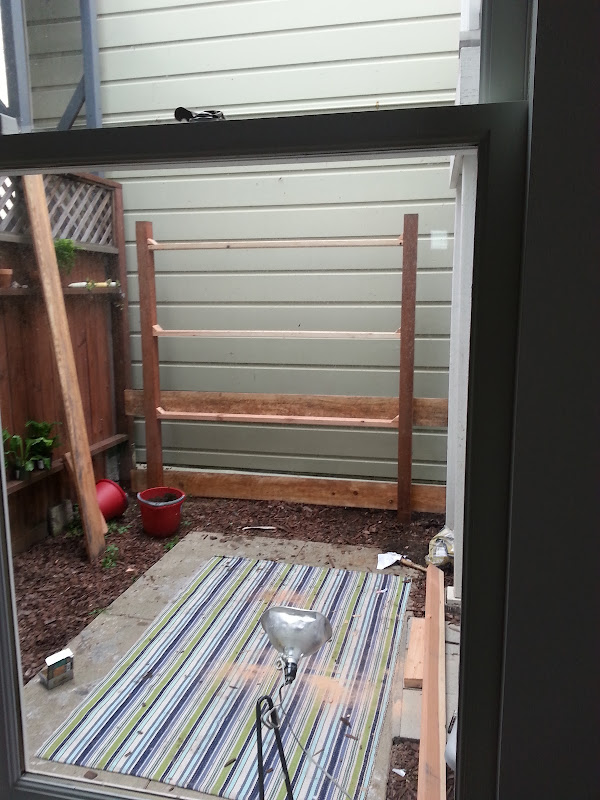 By some miracle when all was said and done both the posts and all the shelves were somehow perfectly level. We didn't actually use a level until the posts were set in the gravel!

We filled with a bit of soil and fertilizer and then we planted. 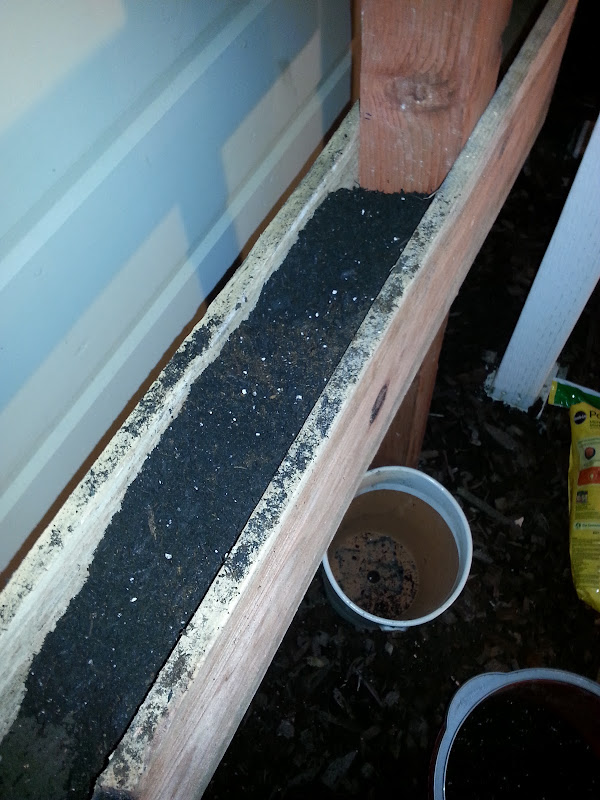 Sam looks happy with the process. 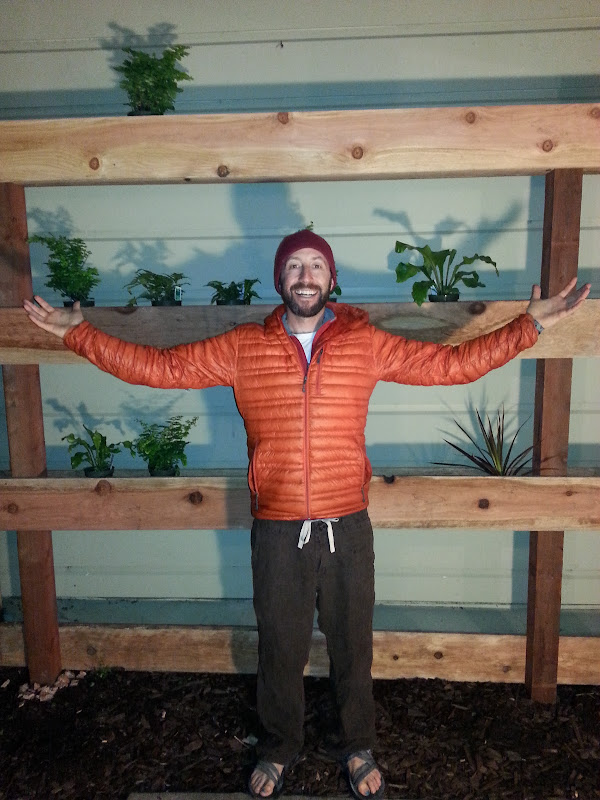 The vegetation is still a little less than filled out. I will update as we roll on through the year and hopefully get a bit more sunlight. Still, it already adds a lot to the ambiance of the backyard, in my humble opinion. Perhaps, I'll grab a few more plants soon. 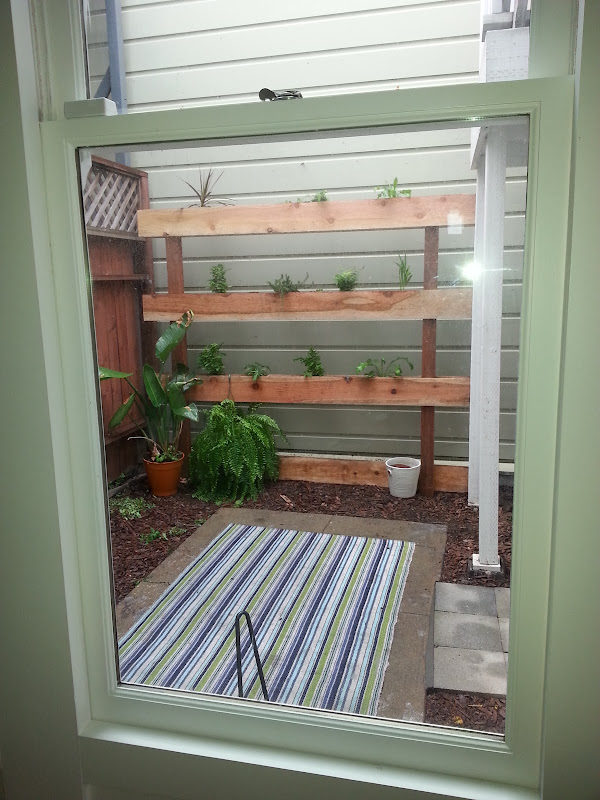 They made it through the rest of winter at least! 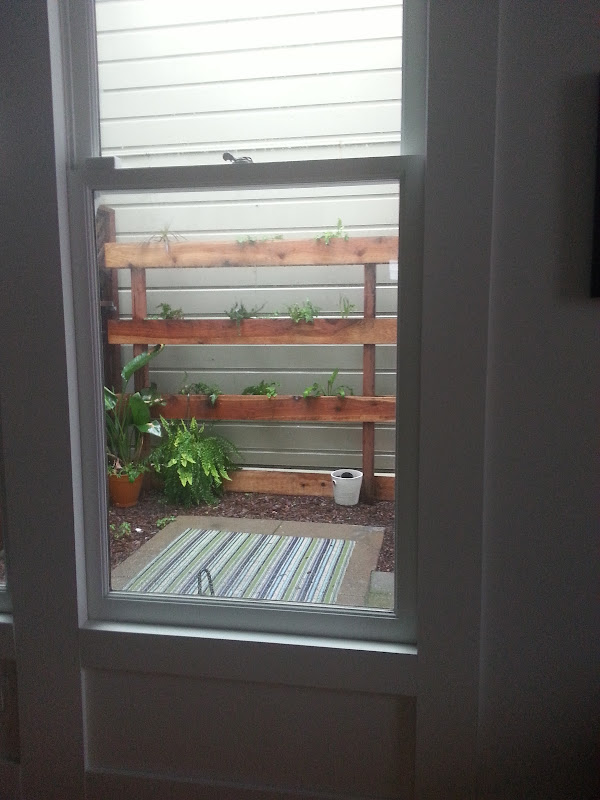