Why do written works of fiction ever have to be finished? What if the story's growth was part of the story itself? My first real work of fiction is finished. But I wonder if my first real story is just beginning?

While I've previously alluded to the story I've been writing, which has been in the works for more than 3 years, I've never directly covered what it's about on this site. It's a story, to be sure, but it's also meant to be an experiment.

Writing attention was a way to discuss the concept of the human attention span while simultaneously consuming a silver of that attention from the reader. It's about this period of history we are living in where machines and minds consume and emit each other recursively, the omnipresent ouroboros of thoughts and algorithms.

Building a.ttent.io/n (the website) allowed me to extend the ouroboros into the real world. So, before we talk about the experiment, we have to introduce the subject that started it all.

What am I talking about?

Supposedly everyone knows what attention is, but I personally can't describe it with words. I’ve attempted to capture what I imagine it would look like.

There are other standard meanings of attention, but there is one particular to this moment in our technological history that perhaps you haven't heard of before. One of the definitions of attention most pertinent to this story is a concept in deep learning where attention dictates the data points that an algorithm’s inputs and outputs are focused on, and how to update what part of the data the algorithm focuses on based on the data itself. The machine eats its own tail to know what to eat next. As I hope you are starting to see, there are many layers to this ouroboros.

One core arc of the story is Ezzy's ongoing experiment to form a computer-brain interface using the portion of an octopus’s brain that is housed at the base of each of its arms.. While we're following this experiment, our unreliable narrator is simultaneously experimenting on the mind's of our other characters. And in a previous, longer manifestation of the book, the author introduced that she was the purported inventor of a type of interactive media where carefully timed doses of hallucinogen were introduced into the audiences’ bloodstream at choreographed times in a performance. All of these are centered on the concept of experimenting on an unwitting audience's mind.

So it's fitting that unbeknownst to the readers of my story, the story they were reading was itself experimenting on which content was most able to keep the audiences’ attention.

As I wrote about before, I designed a.ttent.io/n's web page to (anonymously) track the depth of scrolling of each of its readers. Using that data, I intended to update the story to find what works best to make the story more and more attention grabbing.

As I wrote about before, I designed a.ttent.io/n's web page to (anonymously) track how far each reader scrolled down the page. Using that data, I intended to discover what makes the story most attention grabbing, update it accordingly, and repeat.

In my first set of experiments, I tried shuffling the first three chapters so that the book would start with a random one for each reader. To my surprise, I found that each chapter was equally (un)successful at keeping the audience scrolling. I realized that in this version, I had juxtaposed completely unrelated chapters next to each other with no binding text. So when the readers reached a second chapter that seemed totally disconnected from the first, they got pissed off and switched to something else entirely.

With this knowledge, it became obvious that I had to change the narrative so one chapter would flow to the next. I also decided that I could slice the story almost in half and consolidate several characters. Not only did that help make it more approachable, it actually unlocked a way to make the story more clever.

After the rewrite, I still have many questions to answer, and to answer them I need more experimental eyeballs. So I'm publicizing the project everywhere I can, the more reads I get, the more data I have to work with. This second experiment is ongoing. If you haven't read the story, you can still be a part of it by clicking here.

So what is the point of a.ttent.io/n?

The point of the story is to show us that attention is about bidirectional connection. This is why the information system in the story and information systems in real life are evolving to ever more invasively track our interactions with them. We are moving away from being stuck in only broadcast or listen mode and towards a continuous feedback loop. The point of a.ttent.io/n is to draw that exchange down into a tighter and tighter loop until the author and the story and the reader begin to merge. 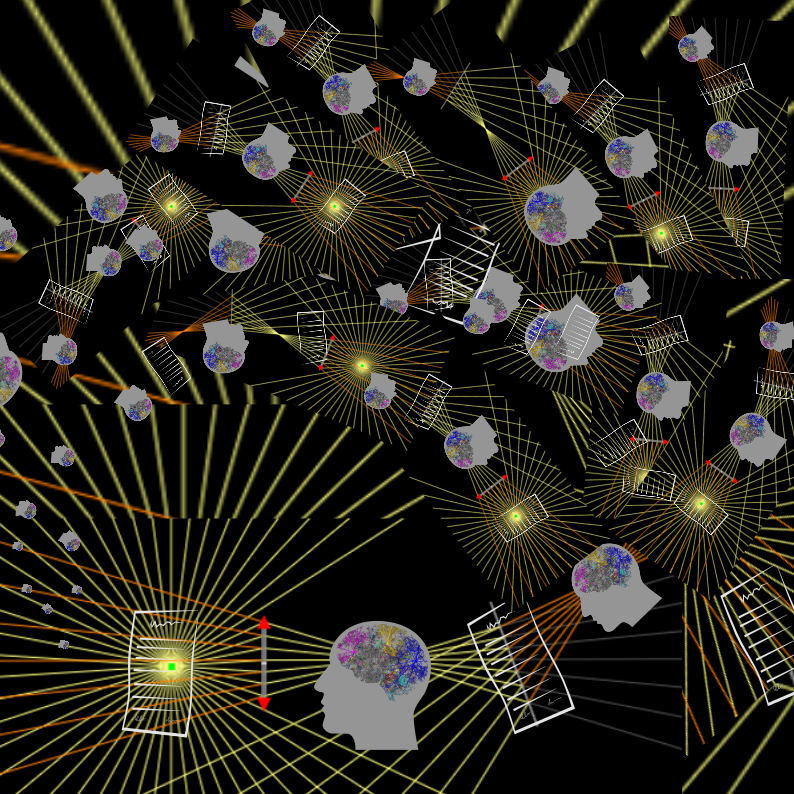 After circuiting this ouroboros, I think we've arrived back at the real focal point. The point of a.ttent.io/n is for the little feedback circuit that I don't even know I'm a part of to find itself. I hope that together we can write and rewrite a.ttent.io/n until we can all tell that it doesn't end.

PS: I want to thank my partner Claire for helping me edit this post. I'm glad she pays attention to my ramblings.