I've been thinking about how groups make decisions. There are a lot of ways decision-making happens in detail, but I noticed a broad pattern that I wanted to discuss in this post: that the most fundamental component of a decision-making system boils down to how the atomic "decision making unit" (DMU) is distributed across the population. I'll explain what I mean by this using the simplest example first.

To start off, lets focus on a pure direct democracy where every decision is voted on by the whole population. Regardless of the details of the voting system (ie winner-takes-all vs consensus etc), a direct democracy is one where every individual's contribution to the decision making calculation is equal. In this case, it's clear that the way power was distributed was pre-determined.

Other forms of democracy, like a republic or a democracy by committee, still have this fundamental even distribution even though the way it is allocated may cause certain deviations in practice. For example, in a republic, your ability to make decisions on one topic are strongly correlated with other topics because you have to elect a representative to decide on both. Still at the very core, we always have the notion that each person starts with predetermined, equal amount of DMUs.

Of course, sometimes republics are set up incorrectly (ahem, United States) with unbalanced allocation of DMUs based on who you are or where you live. (In this case, I am talking just about the unfair distribution due to the electoral college, we'll come to the US's money in politics problem later.) Nevertheless, as long as the mechanism is well documented, this system still has predetermined distribution of DUMs, even though those units are allocated unfairly.

However, I think it's safe to say that for a large majority of reasonable humans, there is some basic understanding that democracy should be based on precisely equal amounts of DMUs per person. For the remainder of this discussion, when I refer to democracy, I mean predetermined, equally distributed DMU.

So for democracy, the atomic DUMs are votes for representatives at federal, state, and local levels, and everybody should get an equal number. Hopefully that makes it pretty clear what a DMU looks like in this simplest example. However, there are other ways to play with the same concept in more abstract forms.

I believe that capitalism constitutes the other major form of DMU distribution system where entities constantly reallocate DMUs to decide what should be done. In this case the amount of DMUs an individual has for a decision is determined by the supply of DMUs they can gather from others in the past and how they want to distirbute the DMUs they have on current and future decisions.

I know there are lots of other aspects to the discussion of capitalism, but for now I just want to look at it as a decision making system. I also want to point out the distinction with the idea of markets here, which is normally looked at from the perspective of exchange of goods. I specifically want to call it capitalism because the core idea behind capitalism is that those with existing capital ultimately have the bulk of the decision making power about what is going to happen in society. For example, who decides what the next "big idea" that comes into existence should be? In a pure capitalist society, this is decided by the group of people who have the money to finance the next set of companies and organizations.

So in the capitalist system, the unit of money (ie the dollar, yuan, etc) could be considered the DMU. Of course, in reality, some decisions are easier to buy and certain people are more efficient with their money so there will always be gaps between real DMU and dollar value as was the case for democracy with votes. However, ignoring those complications, we'll describe the dollar as the DMU for the remainder of this article.

Where this becomes interesting is when we think about how decisions would be made using these two systems. To do this, I've come up with a figure for vizualizing the flows of decision units throughout the system until they are allocated to an outcome. For a simple example, imagine a committee of three that is deciding on the details for the country fair. To keep it simple, lets just assume that there are two choices to make (A and B) that can have a combined total of three possible outcomes.

So here is a diagram to illustrate what it would look like if: 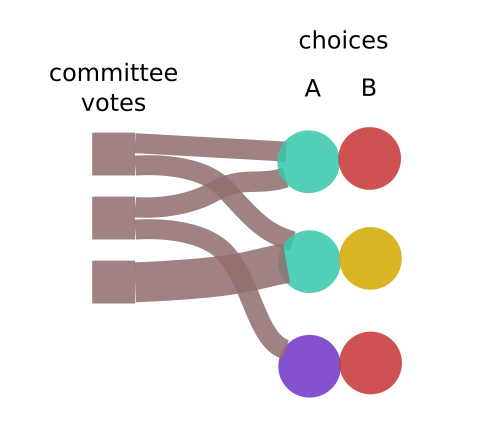 In the diagram, the width of each line is how much support the person gives to a certain outcome. Note that the total width coming out of each committee member is equal because all committee members have the same amount of say in the final outcome through their votes. The only difference is in how much they split their DMUs.

Which choice gets picked is dependent on exactly how the voting system works. If it's a majority win vote, then the first or second one could either happen because either would get 2/3 votes, depending on which one comes up for a vote. But for simplicities sake, lets just assume going forward that whichever one has the most weight gets selected.

Now for any direct democratic voting system, we could use this same form of diagram to get the possible outcomes depending on how each person votes. For a republic, it's more complicated because we have to pass through intermediaries. However we can apply the same diagram to follow the flow of DMUs for an abstract set of decisions. For simplicity we'll look at something simple like a 3 seat county board of supervisors voting on some decision. 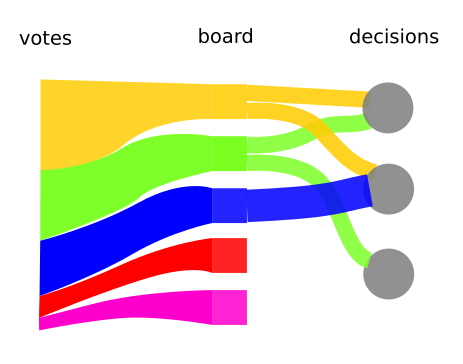 Each band on the left is some group of citizens pooling their DMUs into the top 3 candidates, who go on to vote for something.

Democracy is fairly simple because we start with an even distribution of DMUs and at every round of decision making we maintain that equal division. Unfortunately, capitalism is much more complicated because everyone starts with very different amounts of DMUs, and we are constantly dynamically updating the distribution of DMUs during the process of every round of decision making.

To display this in a fairly simple way, lets look at the case of a small community deciding which of two sites to dig a well for their crops. The two major land owners want the well on their own land, but only one (owner 1) can afford to pay for it on their own. The other one (owner 2) gets a bank to loan them money, assuming that they can charge for water to pay the bank back. 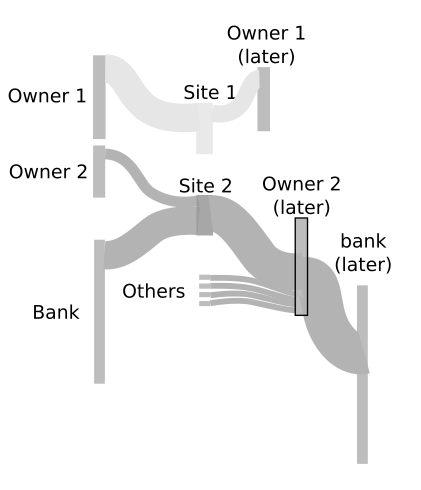 This example is fairly simple, but I hope that it can help to show the flow of decision making power throughout a system.

However, the above visual was only a small segment of the whole decision making trajectory because the way that the DMUs were distributed at the beginning was determined by reallocation of DMUs over many previous rounds of decision making. In order to really inspect the decision making system in capitalism we have to repeat this process many, many times while keeping track of the redistributions.

This becomes very messy fast, but you can imagine what it might look like if the output of the above diagram was plugged in as inputs to the next one. It would start to look something like these diagrams of neural networks

I'll probably have more thoughts on this apparent similarity in the future, but for now, I want to talk about the systems themselves and how they can be related to each other.

The Merit and Downfall of Both Systems

While the human-centrism of democracy feel very naturally justifiable, it's clear that not all decisions should need to flow through such a centralized system. Many argue that this is because government centralization is fundamentally inefficient, but I don't believe that is a reasonable justification. It's very possible that we could restructure our democracy to make that kind of centralized planning far more efficient and transparent than it is. However, I have more fundamental reasons to believe that dynamic reallocation of DMUs has merit on its own.

Capitalism has one upside, which is that we can almost automatically distribute greater decision making power to those who have shown good decision making behavior in the past. This is part of the unspoken rationale for relying on "the invisible hand of the market" to carry out taks with the most efficiency. I believe that there is an advantage to this because even in the most efficient democratic system, a largely unknowledgable populace could continuously make bad decisions, but with staking your investments with capital should downregulate the influence of the unknowledgable in the decision making process. Unfortunately, there are at least two huge flaws in this presumption.

First, for capitalism to work the mapping between the output money delivered for a task must match the true social value of the outcome. This can be strongly violated if people don't have to pay for long-term future costs up front (eg pollution). If this mapping is highly inaccurate then those who will eventually hold all the DMUs will not be good at making decisions, just gaming the system. The other major problem is that unfair distributions of DMUs can at some point render the basic correction mechanism of capitalism inoperable because vested interests can leverage their advantage to set the terms of the output reallocation of DMUs (eg embargoing anyone who does business with a competitor).

There are merits and downfalls to both systems, and each needs to be considered carefully for a given context.

Structuring our System to Find a Balance

As a result of my thinking on this, I'm starting to believe that all of our big fights over the balance between these ideologies might be misplaced. I'm thinking that the big fight we need to fight is not the endless argument over whether to edge closer toward free market capitalism or egalitarian democracy. The smart people in our country should recognize that one balance will never be perfectly appropriate across all times and places and instead we should make the system so that the balance can dynamically adjust.

We've already organically arrived at a system that has built a feedback system between the two mechanisms, where each can be used to decide the strength of the other. Clearly our government should have the power to regulate our capitalist system, by making laws where it applies, converting negative externalities into capital, and by rebalancing the distribution of DMUs when it becomes too unbalanced. And (perhaps more controversially) capitalism has the ability to influence decision making in democratic government by regulating how information is being distributed. As our understanding of this system advances, it should become possible to fine-tune the strenght of the feedback to optimize the overall decision making system.

I think the smartest minds should stop arguing for how the balance should be moved momentarily right now, but instead, how the balance could be better monitored and controlled for societal aims. I think we'd all be better off by outwardly adopting an approach that accepts both ideologies as no more than mechanisms to make decisions in a continuous space of plausible decision making systems.

Imagining a new economy on the Co-op Trail