Imagining a new economy on the Co-op Trail

I'm honestly grossed out by how our economy works. I never really had the privilege to understand it until now, but now that I'm seeing what it's like for a well-off person, I can't help but recognize the preposterous unfairness of it all. A few months ago I learned about the co-op movement and an idea called the solidarity economy (mostly from following Zebras Unite ❤️). I am learning so much and compiling articles and videos, but as I've learned more and more, I'm really starting to understand just how daunting it is to modify the framework of exploitation underlying our whole society.

The thing I've struggled with the most is how it will be possible to shift enough people away from the capitalist economy for the solidarity economy to become a self-sufficient alternative to the dominant capitalist model. Right now, someone has to be deeply invested to even learn what businesses around them share those principles, and I just don't see that happening for the majority of people I know. I could be wrong, but for a solidarity economy to work sustainably, I'd think there needs to be a critical mass of people operating inside of it so that there won't be any reliance on an external, extractive economy. And without easy access for consumers, it will always be way more lucrative to succumb to an exploitative company's tactics rather than do the right thing.

The concept of the trail is pretty straightforward. We want to get from A to B, without relying on traditional capitalist enterprises. Now this would be particularly hard if our favorite hobbies were jet skiing and staying at luxury resort, but fortunately what we like most is eating, drinking, hiking, making crafts, and other low-key enterprises. So we're going to design a long, slow moving honeymoon where we take the time to do those things, and learn about what the world looks like through the lens of a cooperative economic system.

This might seem like a crazy way to enjoy ourselves, but it's my personal opinion that constraints actually make everything more fun.

That said, operating this way will definitely change the trip, and so we hope to provide a resource by documenting all the ways we accessed the solidarity economy throughout. The first big thing that we've realized we have to adapt is how we get around. It would be practically impossible to transport ourselves by car without relying on fossil fuels. Even if we had an electric car, we'd still need to plug into charging stations, and most of those are also built on the traditional business model. To overcome that, we've decided that we will do the trip using a solar powered electric tandem bike and trailer, which we'll build mostly ourselves to use sustainable parts where we can. I'll be writing more about that build over this winter as it comes together. 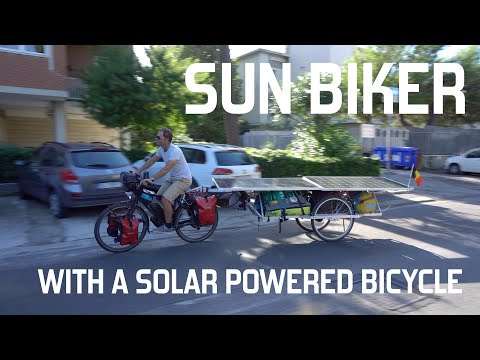 Our goal is to make a round trip from California, through the Pacific Northwest, down to Denver, then across the Midwest to Minnesota, Wisconsin, and Illinois, then back around through the southwest to California again. We expect it to take the better part of a year.

One of my big inspirations is Kirsten Dirksen, who produces her own series of documentaries on alternative dwelling spaces with a very distinctive style. Her work is something that has totally inspired me and countless others to rethink how our inhabited environments can work in the future. With the Co-op Trail, I thought it would be very cool to do something like that. While we're traveling, we're going to try to make a documentary about all kinds of co-ops and other organizations in the solidarity economy.

So what was the first thing I did? Of course, I built a website. That's now how I structure projects now I guess: "Advertise it like it's already been built, then start to build it."

The next step is going to be building our electric tandem bike. I'm already a bit worried that it may be a challenge to source the parts from co-ops, but I will try my best and document where I come up short. I think a crucial part of this whole project will be to catalog what parts of the traditional economy we had to rely on because there just wasn't any other choice. Once that is working though, I'll start the hard part: reaching out to organizations to start doing profiles on them and compiling them into the itinerary. That will really push me to be more proactive in making connections—something I haven't been so great at in the past, but would totally be worth it to practice.

I already know it's going to be an amazing trip, but if we do it right, it can also be a resource to launch us and others into a new economy for the rest of our lives.

Why a different shade of solarpunk