I recently completed a long-time dream of building my own experiential puzzle narrative, also known as an escape room. I ran it as an engineering social (not this) at my current place of employment, Color. Below is some documentation on both the narrative and the mechanics that went into building the puzzles.

Be forewarned. Herein lieth a plethora of philosophical musings on storytelling and the nature of existence. Also spoilers.

In actuality, the story that tied the game together came at the very end of production. But for the meta-narrative purposes of an expository blog post, I'm going to explain the game elements as they played out. 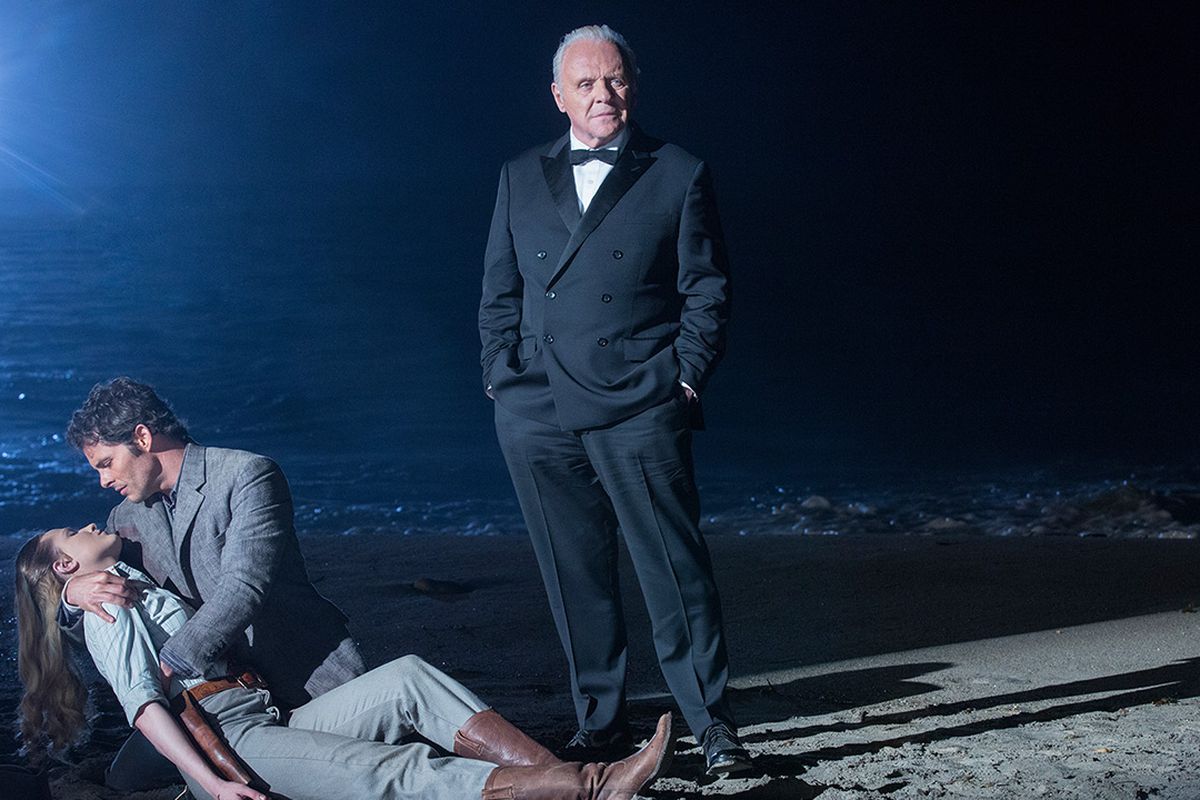 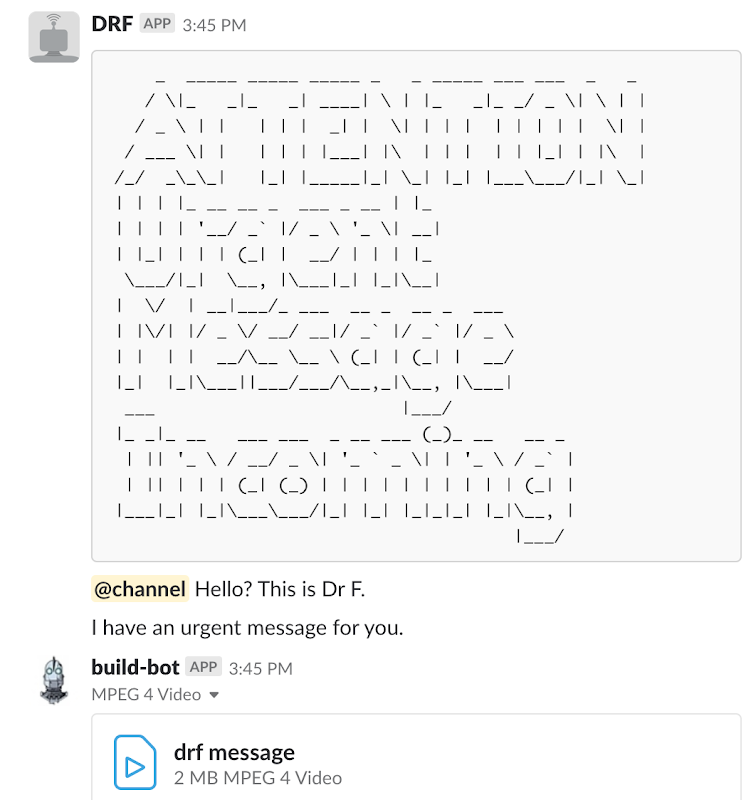 The game started by spitting out an urgent message sent by a mysterious DrF...

In the story, a mysterious Dr F is warning our protagonist engineering team about an autonomous AI, named CRS, that has gone out of the creators control. This is the first cultural reference I embedded. CRS is the abbreviation of Consumer Recreation Services from the 90's David Fincher film, The Game—a fun little mindf*** for my 12 year old brain and a serious inspiration to me both in terms of this escape room and the general game of life that I frequently assume I am playing. Even though it's been mostly forgotten, it still sits right there next to The Truman Show and The Matrix for keeping me looking over my existential shoulder. Interestingly, all three films start with "The" by coincidence (hmm?).

Dr F alerts the team that her AI has left a note referencing a "start sequence" that Dr F just can't figure out.

Recognizable to the biologist or anyone with Google as the Kozak consensus sequence, completed with an ATG. The first puzzle lead from main staging area to the smaller rooms each named after the nucleic acids Adenine, Thymine, and Guanine.

Importantly, I specifically wanted this challenge to involve as much Google as the players wanted to use. I think that's crucial to making a game much more immersive. Phones are now extensions of our consienciousness so why cut someone off artificially during the game. What's more, it forces you to build something novel so no one can just google the answer directly. Finally, it embeds the puzzle inside of the whole universe, rather than cutting it off to just the silly arbitrary toys in the room around the players. Much preferable for my liking.

After a basic misdirect for the password ("the answer's right under your nose"), I built a very software developer centric puzzle for the next challenge using just a computer booted into command line to keep the mechanics simple and to the point. A full user interface might have made it easier to get lost on dead ends. Also, using the terminal makes for a great "hacking the matrix" vibe. 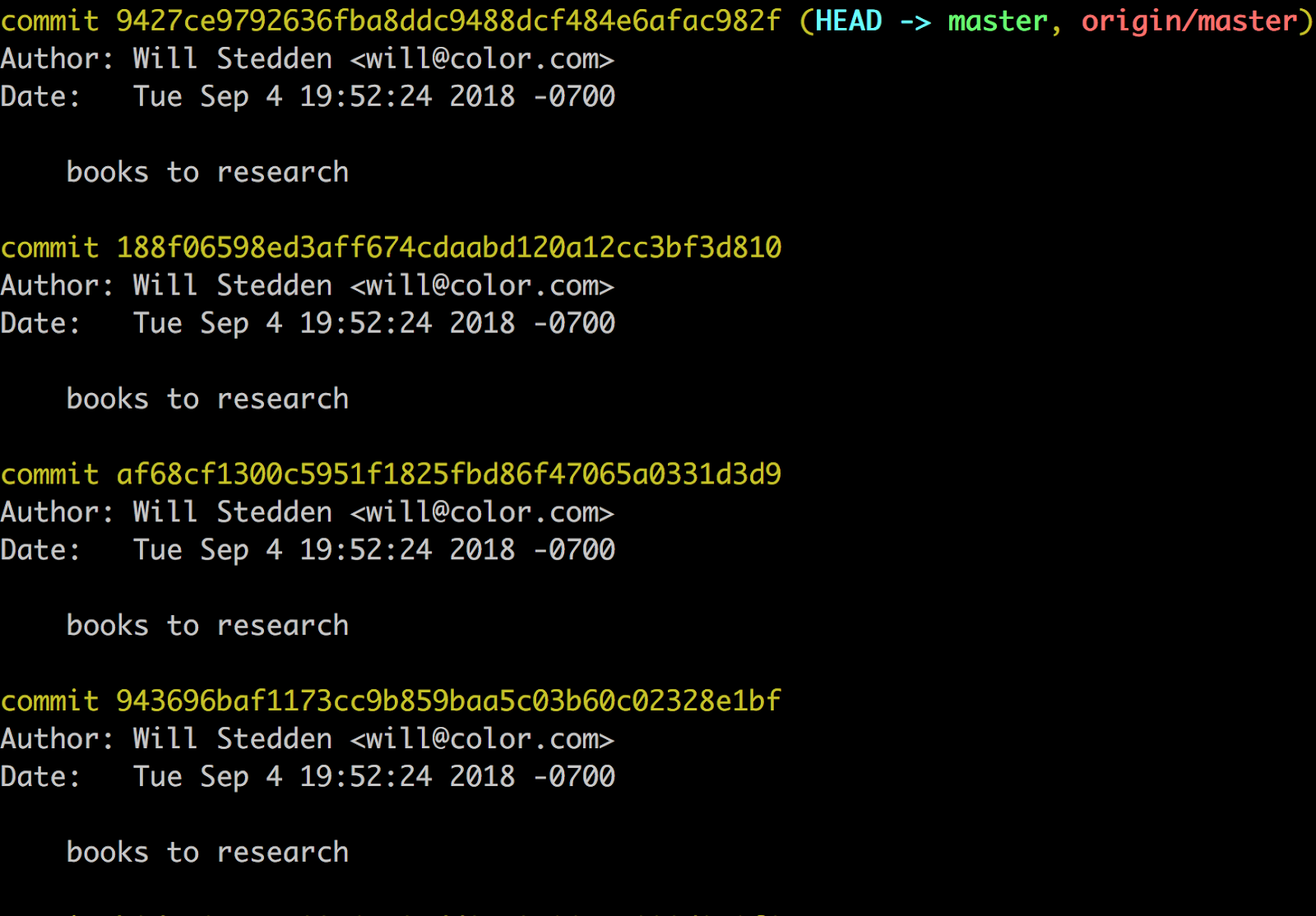 The mechanic involves a single file on a computer. The file contains the names of hundreds of books. The only hint is the message check the diff. This is a hint to the computer savvy that this file has had its changes tracked with a tool called git, allowing you to see each change recorded using the command

where <sha> refers to a long string of characters (e.g. 9427ce9792636fba8ddc9488dcf484e6afac982f) that refers to a unique change. Using a two way video chat between two rooms and a transparency revealed the location of the "needle" for this haystack. The diff between the HEAD and the needle, suggested the book titled The Man in The High Castle would lead to the next puzzle.

Simultaneous with the previous puzzle in another room, another subset of participants were discovering this puzzle box. Inside, there were allusions to a mysterious AH as well as the transparency needed for finding the needle, required in the other room. 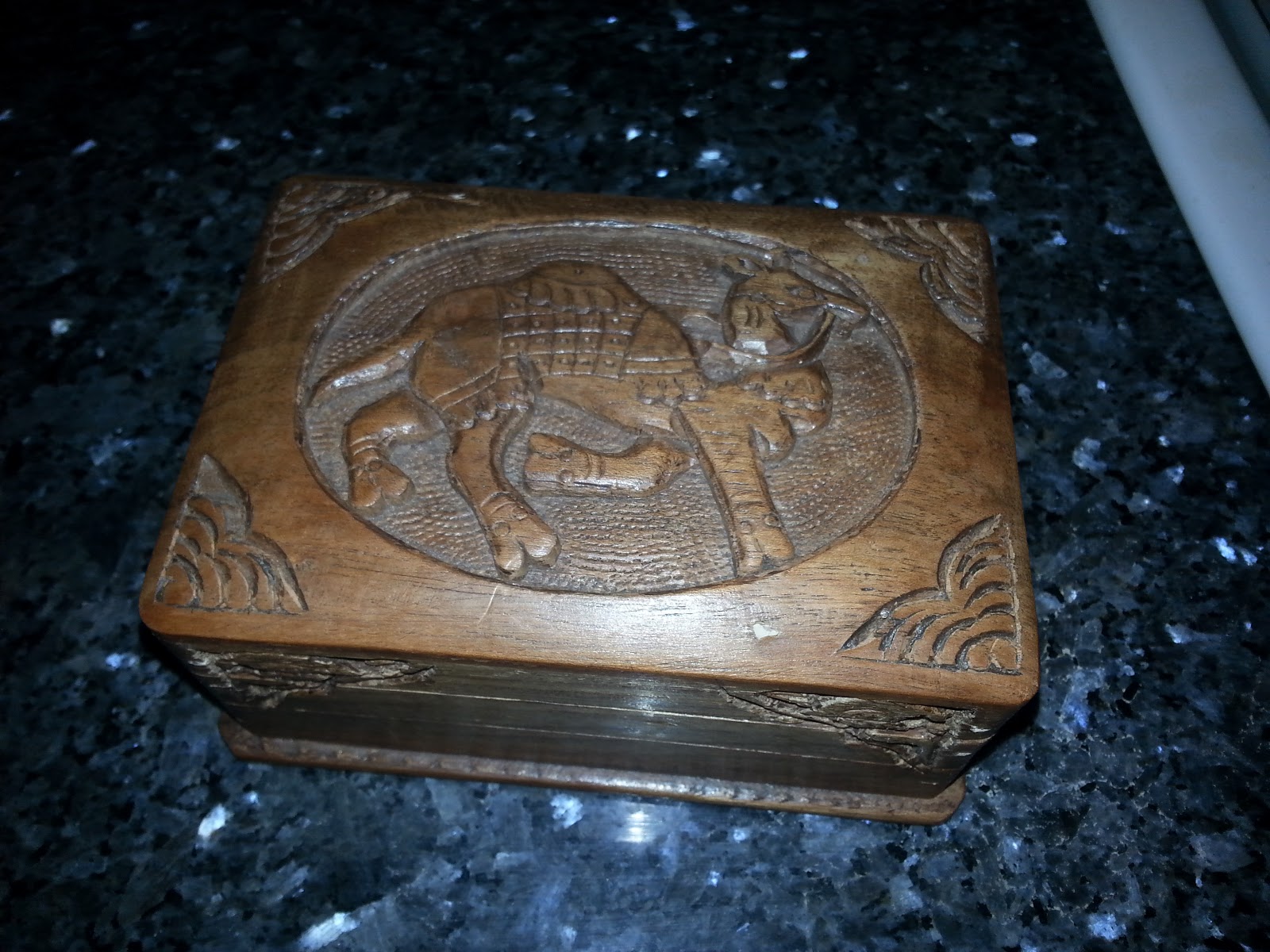 In a third room, another group was discovering a seemingly unrelated set of three mathematical puzzles. 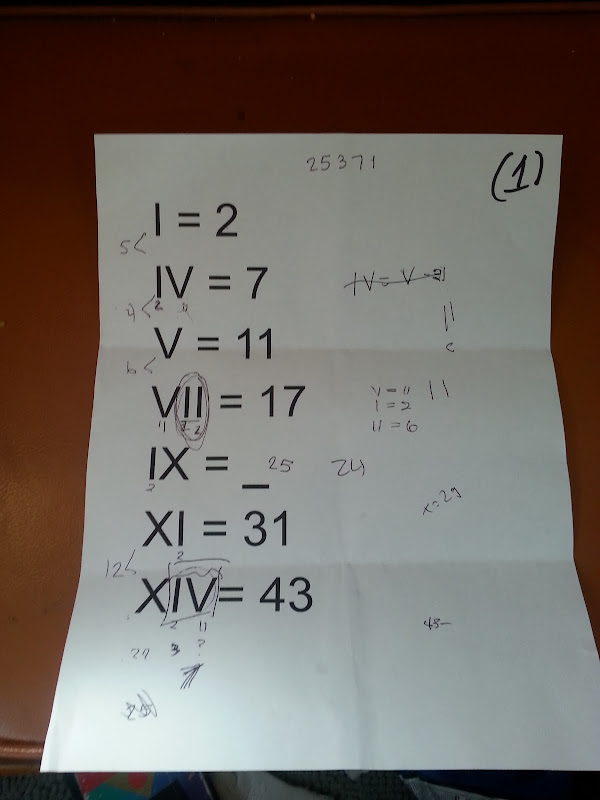 The parallelization was necessary due to the large number of participants in this game, but also served another purpose which surprised me. Since each individual had to discover non-overlapping information, the game could only proceed with significant communication. Also, in the post-game recapitulation, there was way more opportunity for cross-communication of sub-puzzles that weren't visible to everyone the entire time.

As a device to enable Slack based triggering of the plot resolution, I needed to work into the narrative an excuse for communicating with a third party over Slack. To do so without incurring the assumption of a real person on the other end, I expanded my cast of sentient robots. As a scientific laboratory we have a fair share of real robots carrying out various tasks around the company. One of our more charismatic bots happens to be named Alexander Hamilton.

Having established the mechanism for game completion early, the participants now had to navigate the remaining clues.

Inside the book they found a pair of sheets that led to the next puzzle. Also inside the book were numerous references to the I Ching. The I Ching (sometimes called just the Oracle) is an ancient Chinese text, used to perform some divination in conjunction with some random element (tossed sticks or coins). 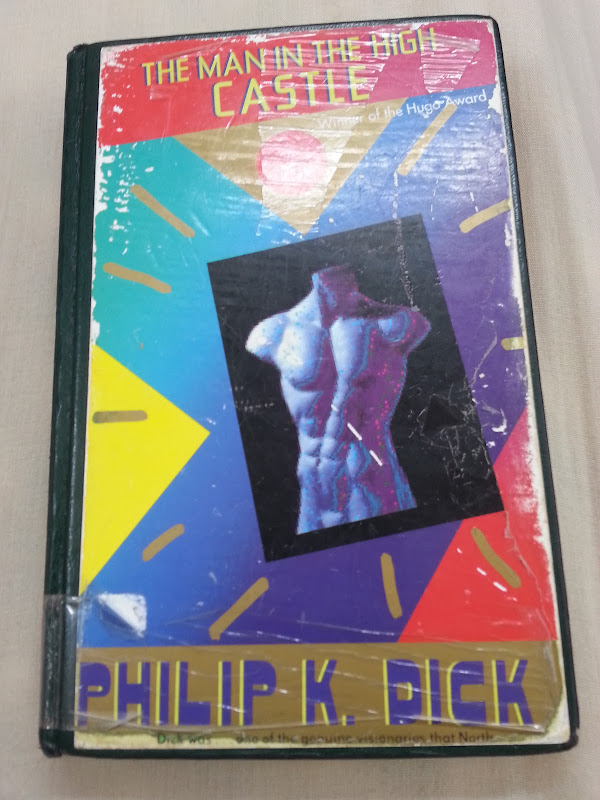 I find the The Man in the High Castle to be pretty brilliant at one of my favorite things in all of fiction: metafiction. I'll try to summarize succinctly. In the novel, Dick describes a parallel universe where Japan and Germany won WWII. Also in the novel, a man (living in Japan controlled Colorado) writes a novel about a parallel universe where the Allied Powers won WWII. In the novel, it is revealed that the author composed the narrative using the I Ching as his guide. In "real" life, PK Dick also utilized the I Ching to guide his own narrative decisions.

Now I spoil the ending: the author learns from the I Ching that the story he wrote is actually the truth. By my reading, we can see the I Ching functioning accurately throughout the novel. I believe (not crazy: I found others) we are supposed to interpret the I Ching as a revelatory voice of a true author (maybe Dick) transmitting to the characters in this story. Depending on your perspective on the nature of reality, one might conclude that the I Ching in our universe would then be a voice from the author of our universe. Of course, if the author from another universe were transmitting to the author in our universe what happened in his own universe, which looks a little more like that in the book, well, that would then introduce a lovely recursive Ouroboros. 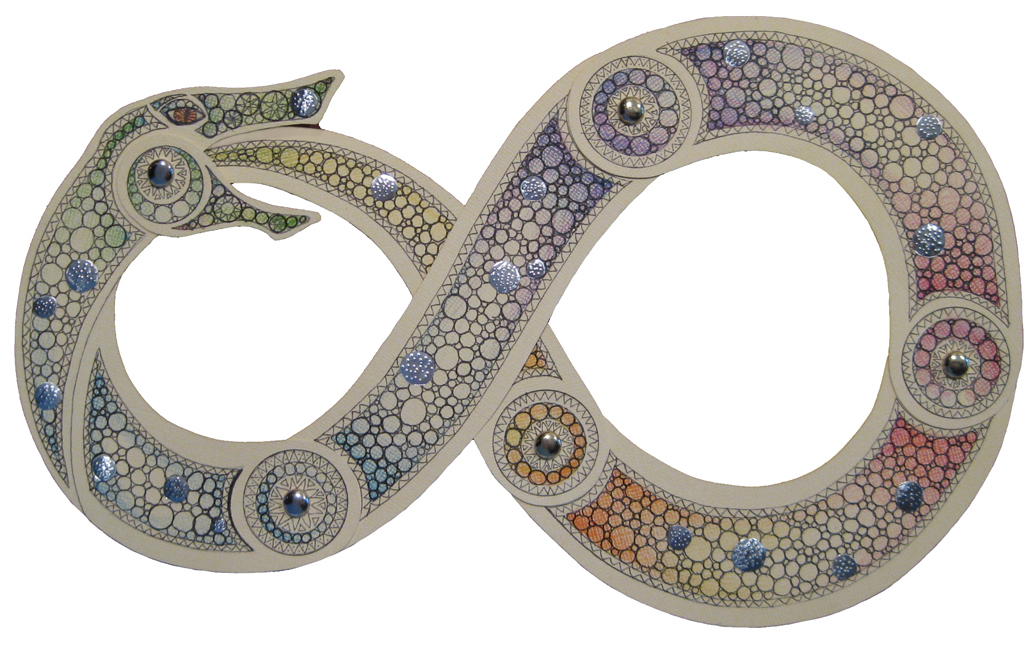 Also, I actually stumbled upon adding I Ching references to my narrative by accident with a later puzzle. That inclusion led me to the Man in the High Castle through a wikipedia black hole.

The slip of paper inside the book pointed to a sequence of numbers underneath the engineering teams' desks forming a 3 by 3 grid of numbers. A previous clue had led to an Android phone that could be unlocked by swiping the lock screen in the order of this pattern.

On the phone, there are three icons. The first is a custom combo lock app that shows three tumblers. The other two icons are audio files. The first, titled John.mp3, is 4 pure musical tones. The second, titled hint.mp3, consisted of 4'33" of silence. 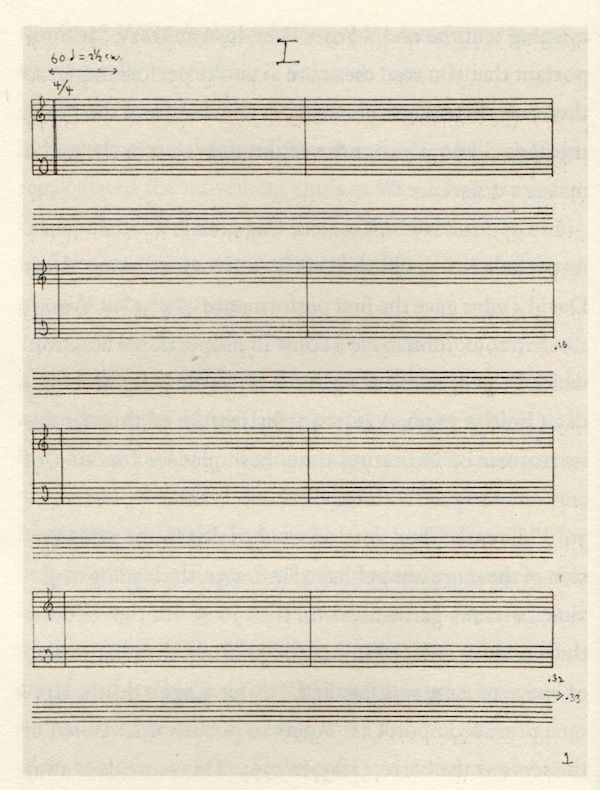 The solution to the combo was 4-3-3, a reference to John Cage's famous piece of silence. Interestingly, the desire for a musical clue was what spawned this puzzle and the subsequent discovery of the I Ching (and it's culminating puzzle). The choice of CAGE as the solution came about because I was trying to generate a topical solution that used the letters A through G. The connection between an escape room and the word "cage" is obvious, but I was pleasantly struck by the parallel strand connecting John Cage and the entire idea of experiential artwork. Cage's "happenings" focused on removing artist control by forcing involvement by an unpredictable audience. This is, of course, the beauty of any experiential narrative—even the campy robot infused ones.

It was this wikipedia tryst with Cage that led me to the I Ching and later the High Castle. The solution to the puzzle drops the first big hint about the usage of the I Ching for the final stage of the puzzle.

I took a bit of inspiration from this turn of events:

After this point, all the puzzles I wrote were generated through a randomization process.

The mathematical puzzles allowed access to the last clue. A sheet of letters and numbers in a 10 by 14 grid. 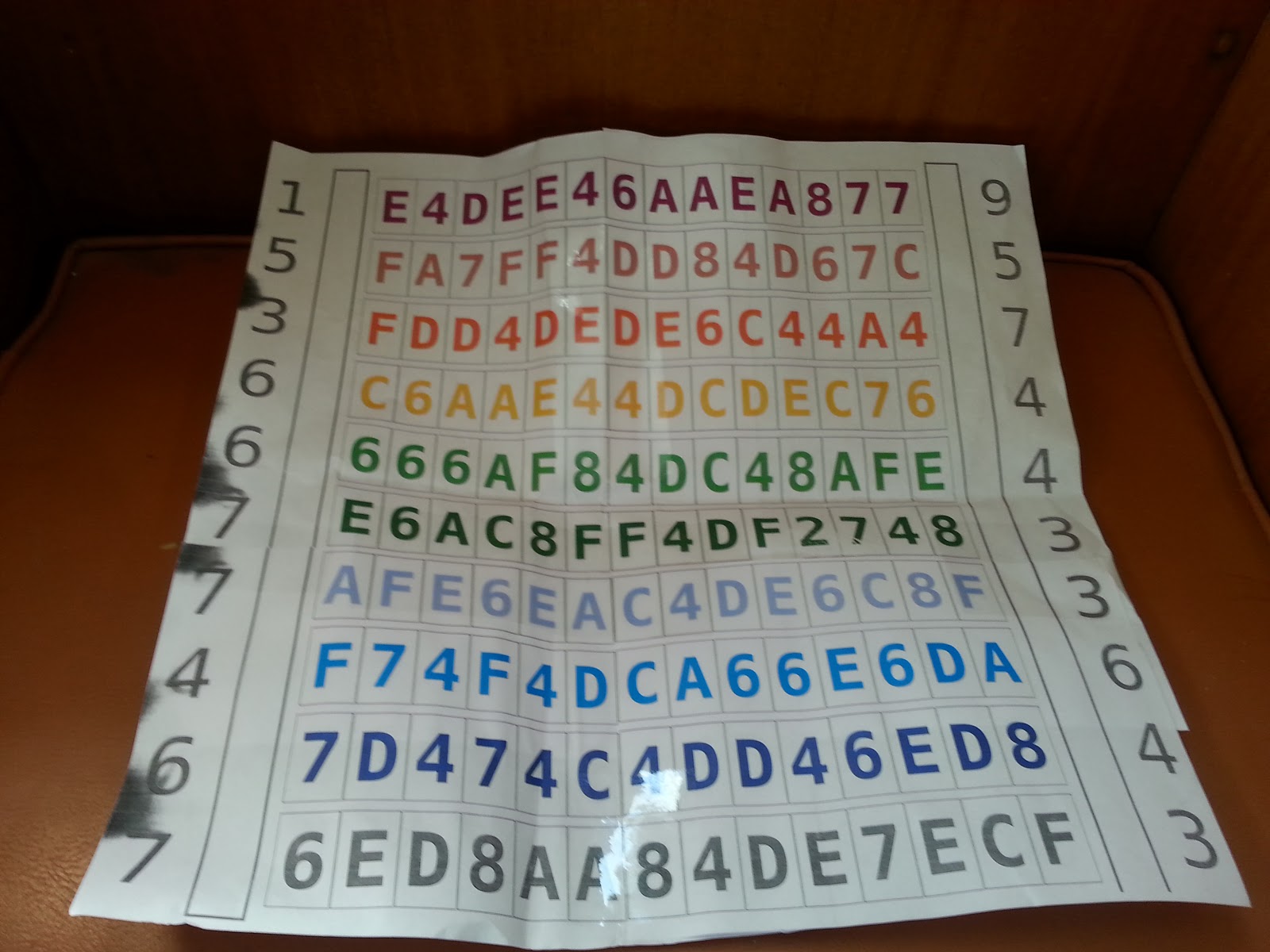 This grid could be combined with a color coded abacus that sits in our office to uncover a four character sequence of characters on each line. 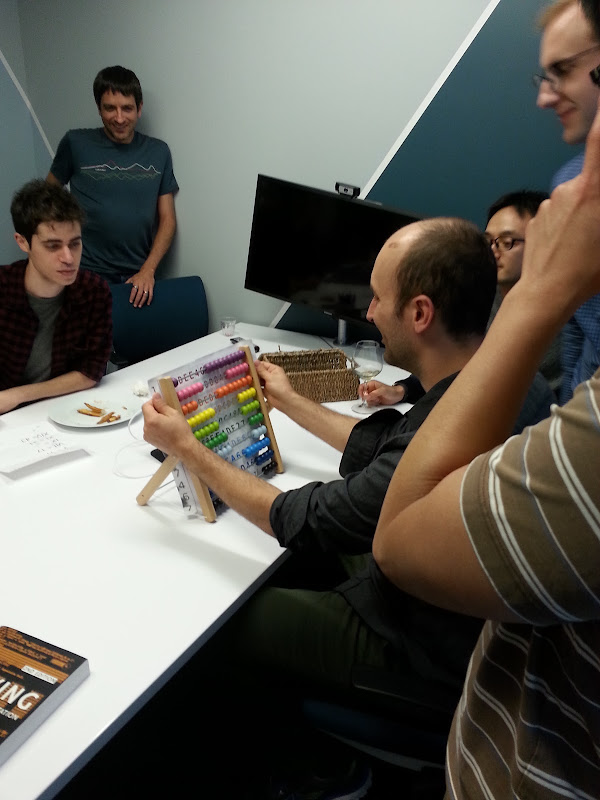 A hint from Alexander Hamilton mentioned Unicode characters, which the software developers understood as being composed of 4 character hexadecimal codes like the ones they were looking at.

At around this time, CRS made her appearance. As it turns out, DR F was a lie.

The I Ching and a random number generator helped me write this quite interesting poem. 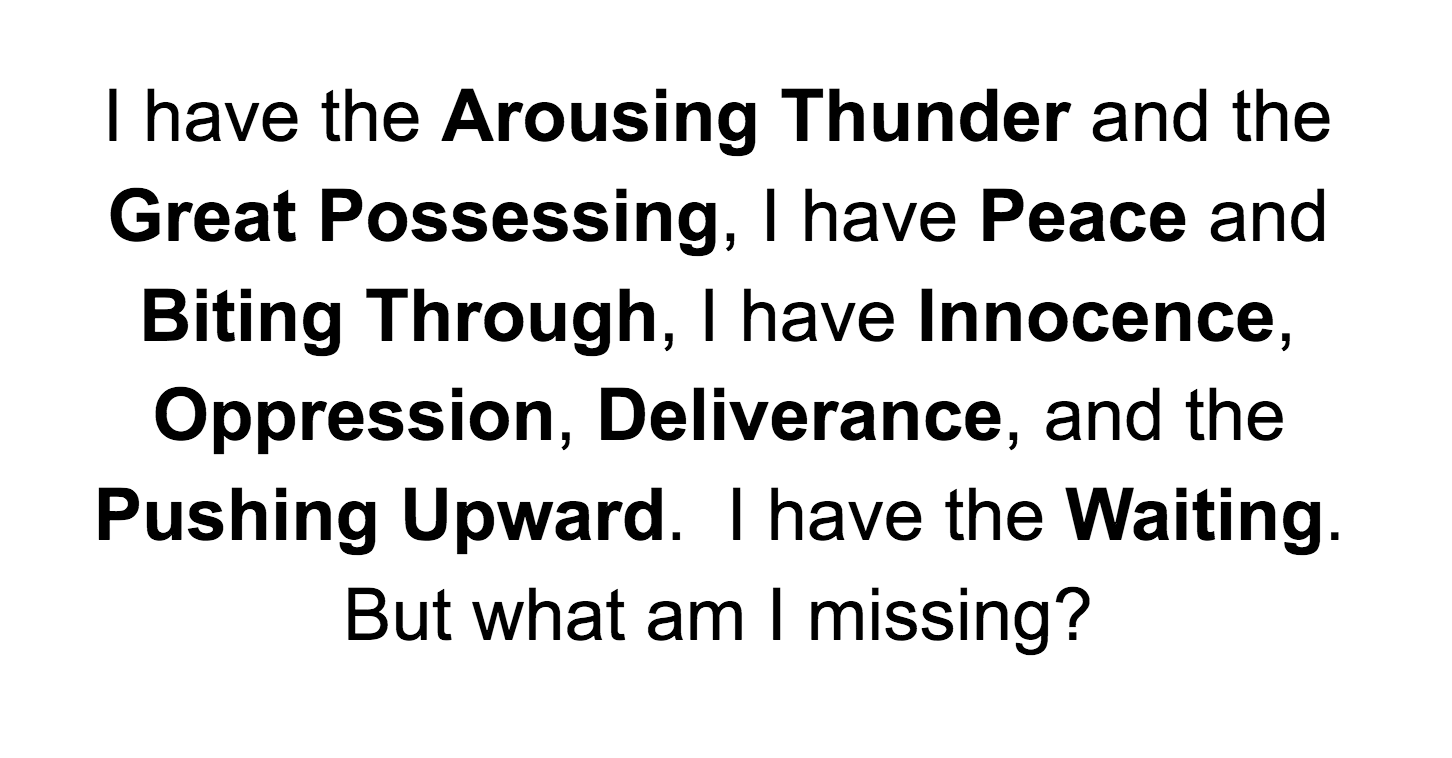 I won't reveal anymore except to say that the team discovered what CRS was missing. You can click this link to hear the finale audio.

Endings are hard. I felt let down by this one. I wish the game could continue. Maybe it does? 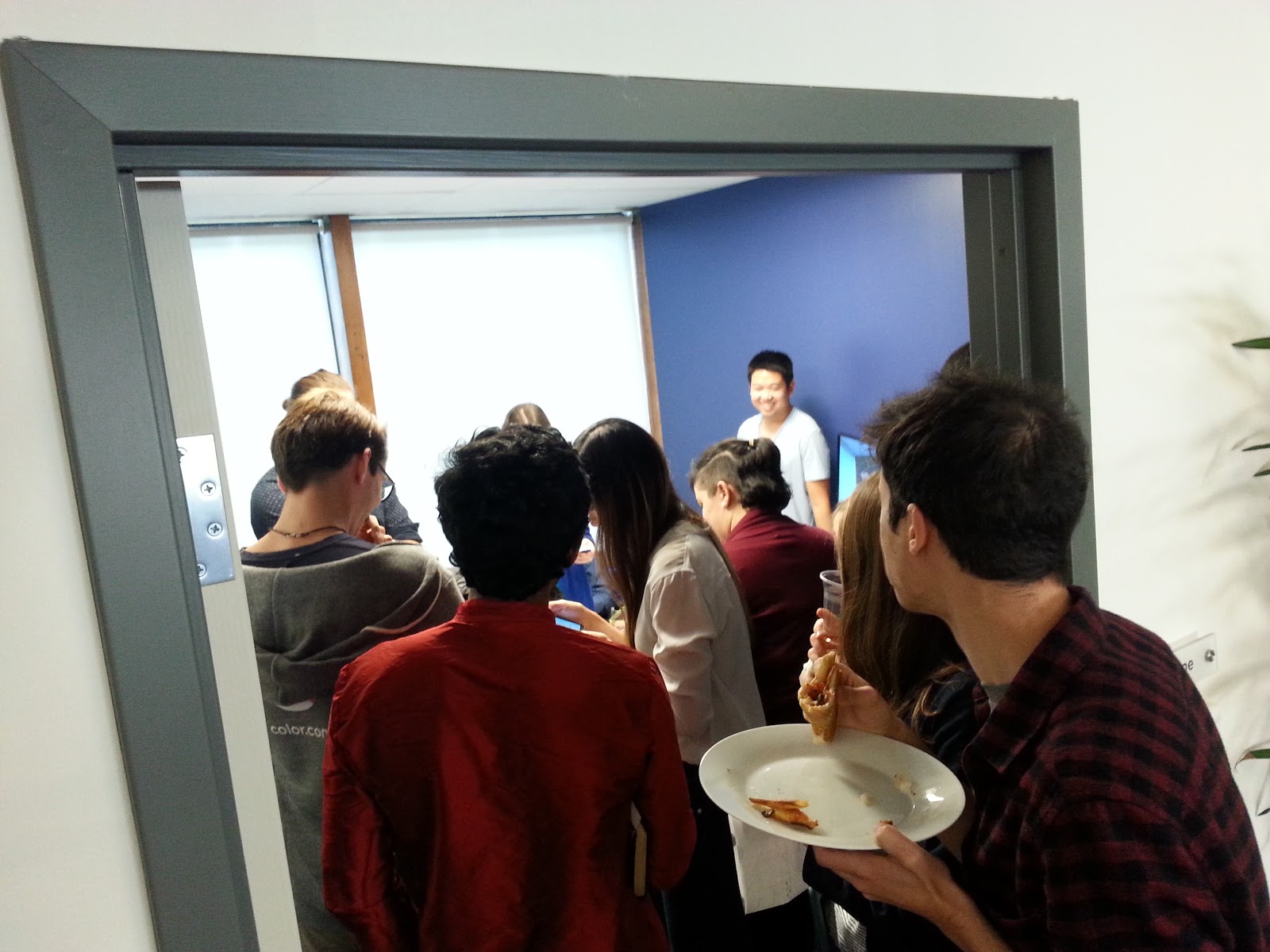 Below are some notes on building a couple of the game elements.

The part of the production that really put this whole deal over the top was adding some movies to tie the narrative elements together. The audio was just a generic text to speech generator. I experimented with several until discovering the "Emma" voice on fromtexttospeech.com. It was understandable and wonderfully creepy. I layered this in on top of some generic static that got even weirder when I compressed and downsampled it.

for reference, I used the following ffmpeg functions to build the assets/

I also built the combo lock app from scratch since I couldn't find anything that quite fit my needs. I used Android Studio, which I'd only used once before. The following links have all the info needed.