For the past few months, I've been working on a series of interconnected projects and thought experiments centered around the concept of the quantum multiverse, a theoretical interpretation of quantum mechanics that implies that many parallel universes are created by the outcomes of every quantum mechanical measurement. It's a fairly trippy concept, and I'm pretty sure that my interest in it is making me go a little crazy. Still, I think this concept is cool enough that I want to share it with as many people as possible. To do that, I've decided to expand the experimental system into a full-scale art experience.

The concept of the Quantum Multiverse Bifurcator comes from the familiar sci-fi trope of alternate parallel universes. Often in these stories, people find that a random event has split reality into two divergent timelines. As it turns out, there is a real scientific interpretation of quantum mechanics, called the Many Worlds Interpretation that seems to imply this sci-fi concept could be real.

But there is a catch. The only thing that actually splits the universe is the outcome of a quantum mechanical event. Most random events in our lives are probably classically random, meaning they are deterministic, but we simply lack the ability to predict them. As far as we know, quantum mechanical randomness is different—quantum events can't be predicted even with perfect information.

But there is a way to actively generate parallel universes in a manner in line with the scientific understanding of the multiverse. We can couple the big decisions that would split the universe with the random outcomes of quantum mechanical events. In short, we can play dice with the universe. To accomplish this feat, I built an application called the Quantum Mulltiverse Bifurcator, which pulls a real quantum mechanical measurement to tell a human what decision to make. If the human follows their instructions, according to the many worlds interpretation, two universes are made, one in which each option occurs.

My partner and I decided to build an installation to present the Quantum Multiverse Bifurcator (QMB) and allow people to interact with it. We decided to bring our installation to Burning Man's SF Decompression party. It's fitting that we brought this to Decompression because the idea for the QMB was inspired by Burning Man itself. When I went to Black Rock City for the first time in 2019, I realized the perfect gift to the Playa would be a way to let all participants do everything they want. But with so much going on there, the only way to do everything is to split the universe. 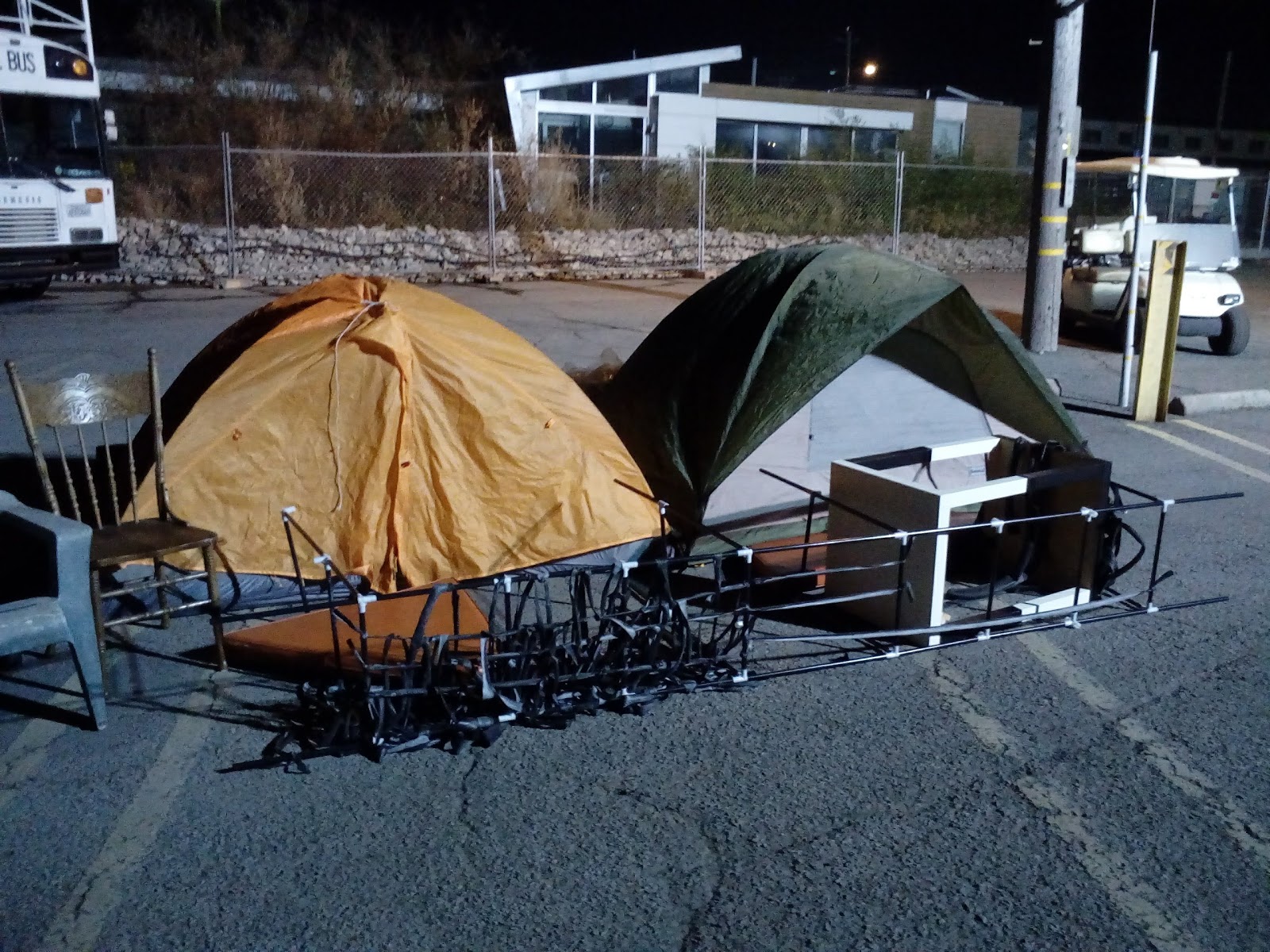 So conceptually, the art would be interacted with by using the quantum measurement to determine which tent you went to hang out in. My partner decorated the interiors of the tents and added a logbook for people to describe their contemplation on the Multiverse. 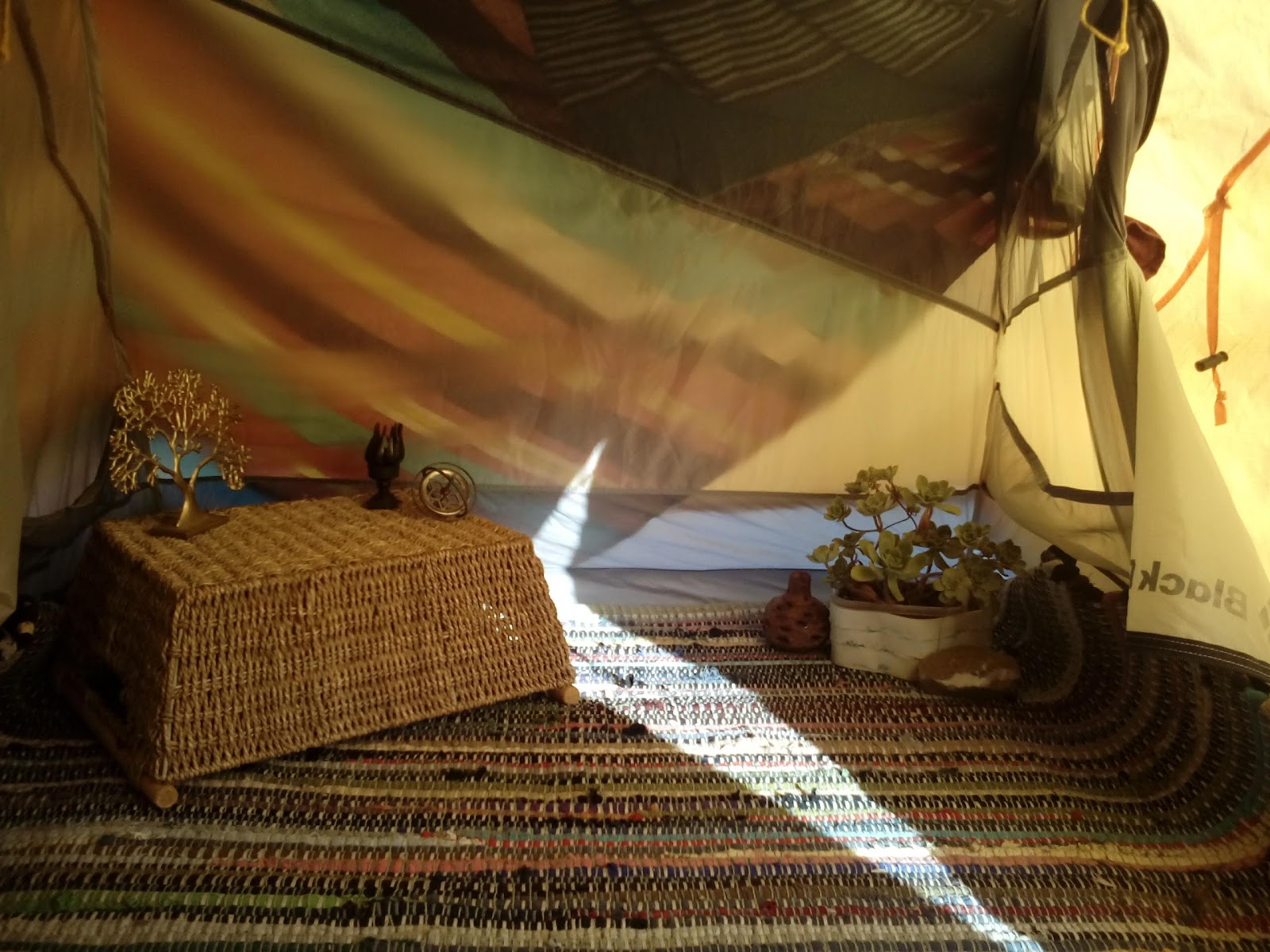 To add to the experience, we wanted to disguise the fact that it was just a computer and some tents. I'd been collecting bike tubes for the past year to put toward another sculpture. We just cut them up and hung them on a rack that we found on the street the week before the event. 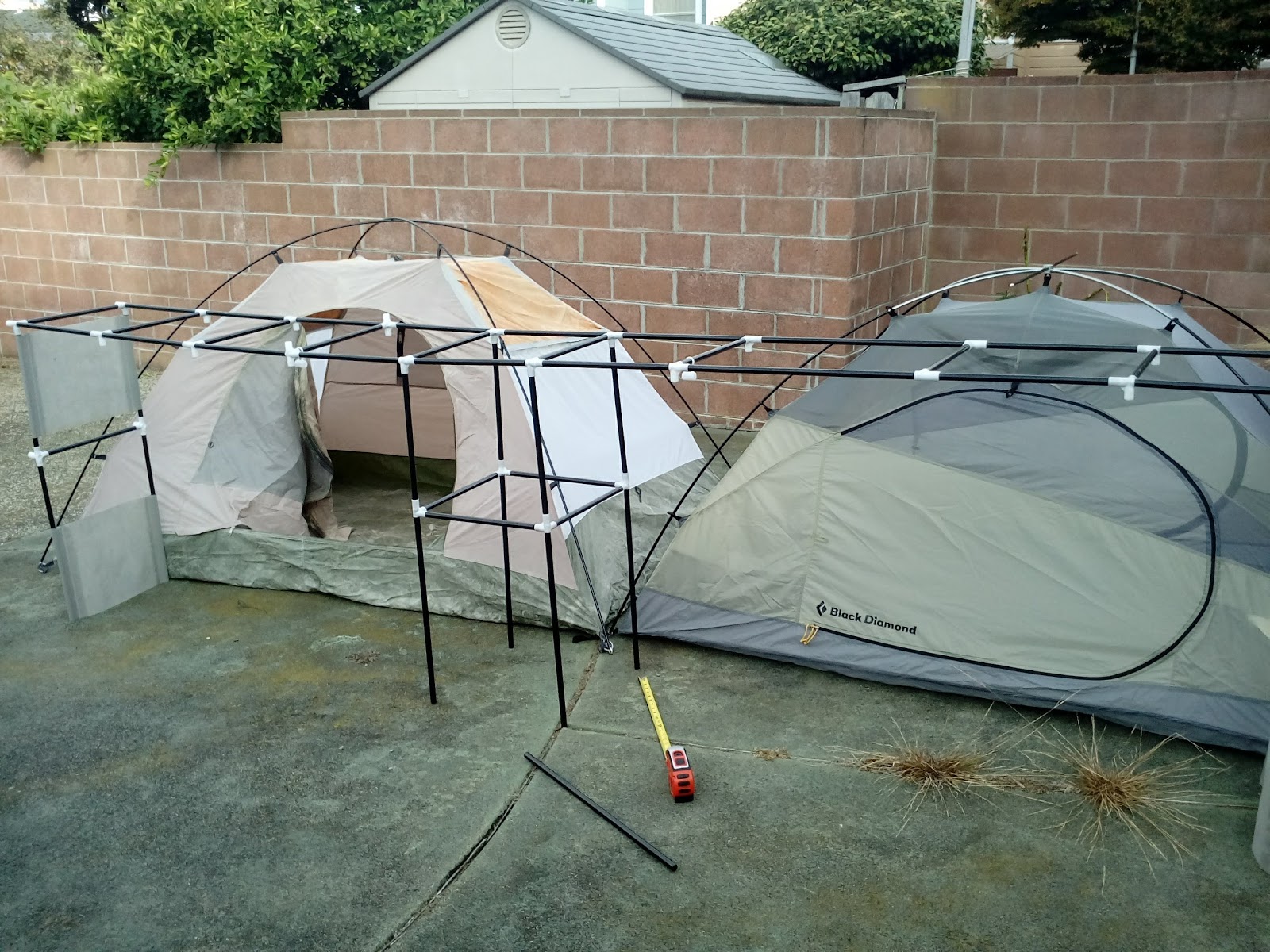 We also added a mirror off to the side between the tents. This causes you to see yourself climb into the mirror on the other side out of the corner of your eye, which makes for a pretty cool experience when you crawl through. 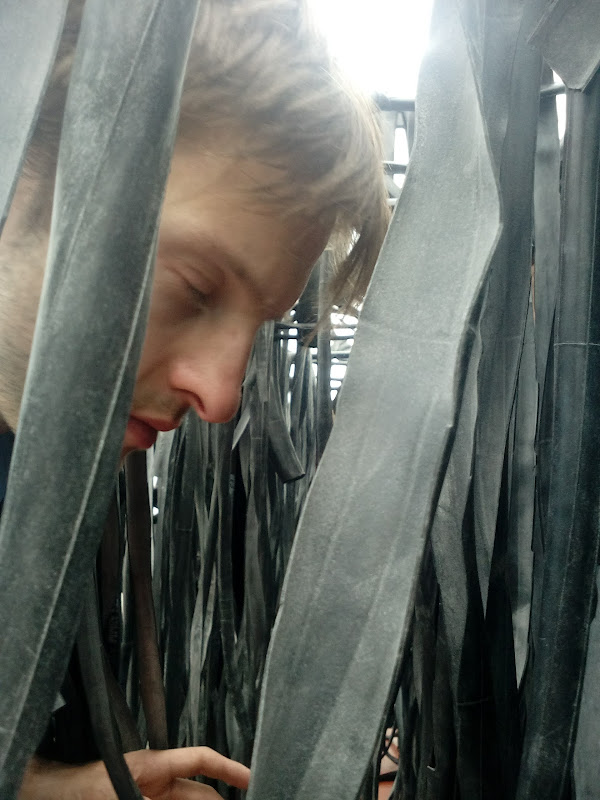 Claire assembled a bunch of random parts to make the terminal look amazingly sciency (and less like two IKEA tables stacked on top of each other). We'd found a bunch of copper wire on the street back in Oakland. In a previous project, I'd been playing with some PLA filament that I'd used to hand mold a cool little ball. 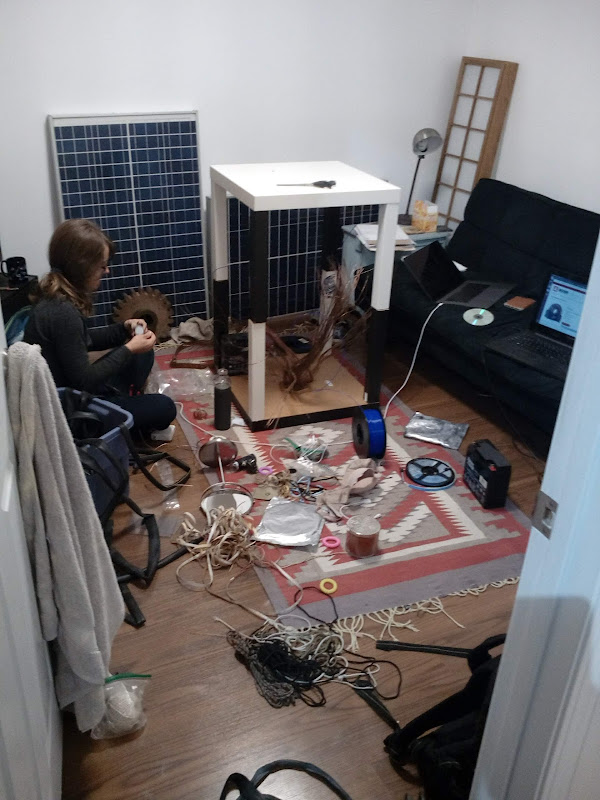 When we were on site, we realized we wanted to connect the terminal and the tent structure together to make it look like one big machine. We connected them using more bike tubes, and used them to ensconce the laptop to make it look less lame. 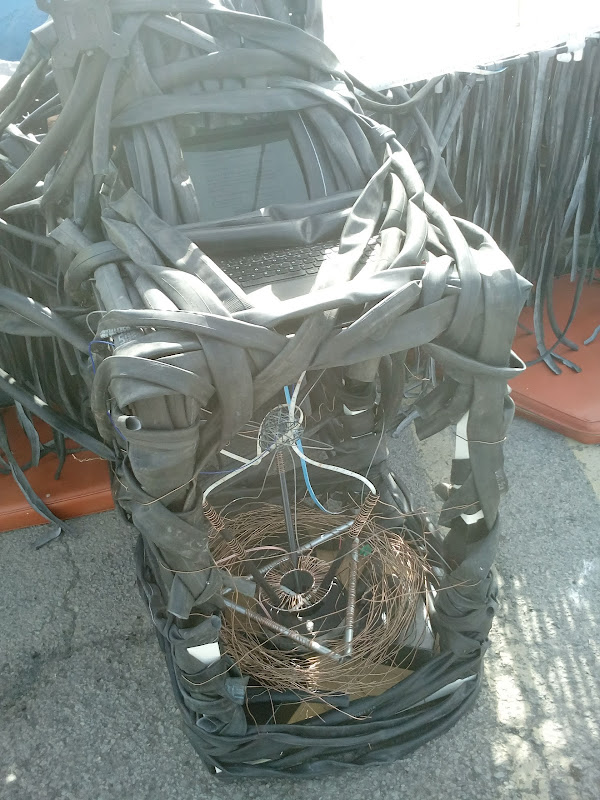 The full effect was pretty neat, and very Burning Man. We got a lot of comments from the folks on MDMA that they loved the textures of our installation. 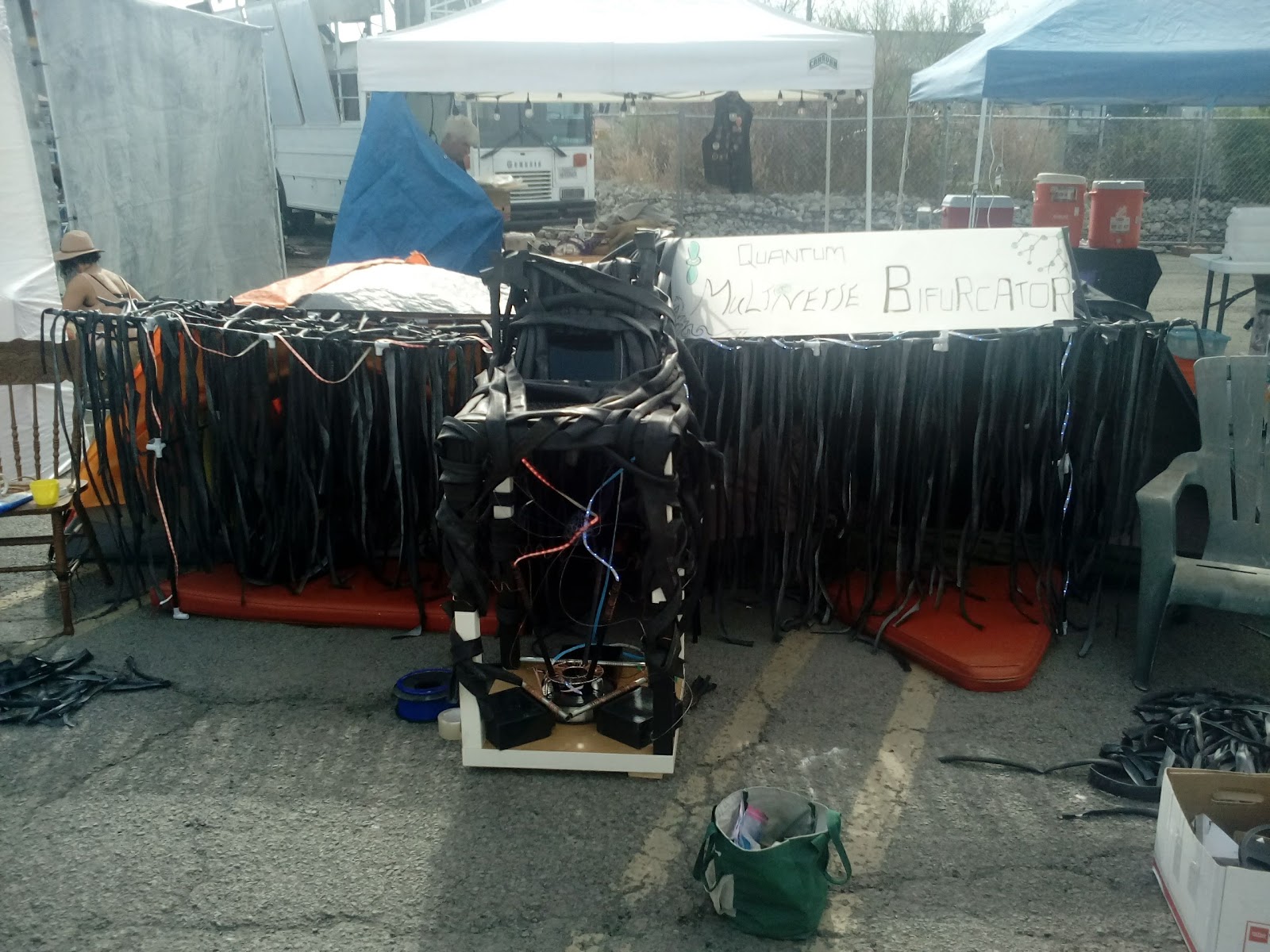 The project looked even cooler at night because we connected red and blue LEDs to distinguish the two "paths" that the Bifurcator could point you on. 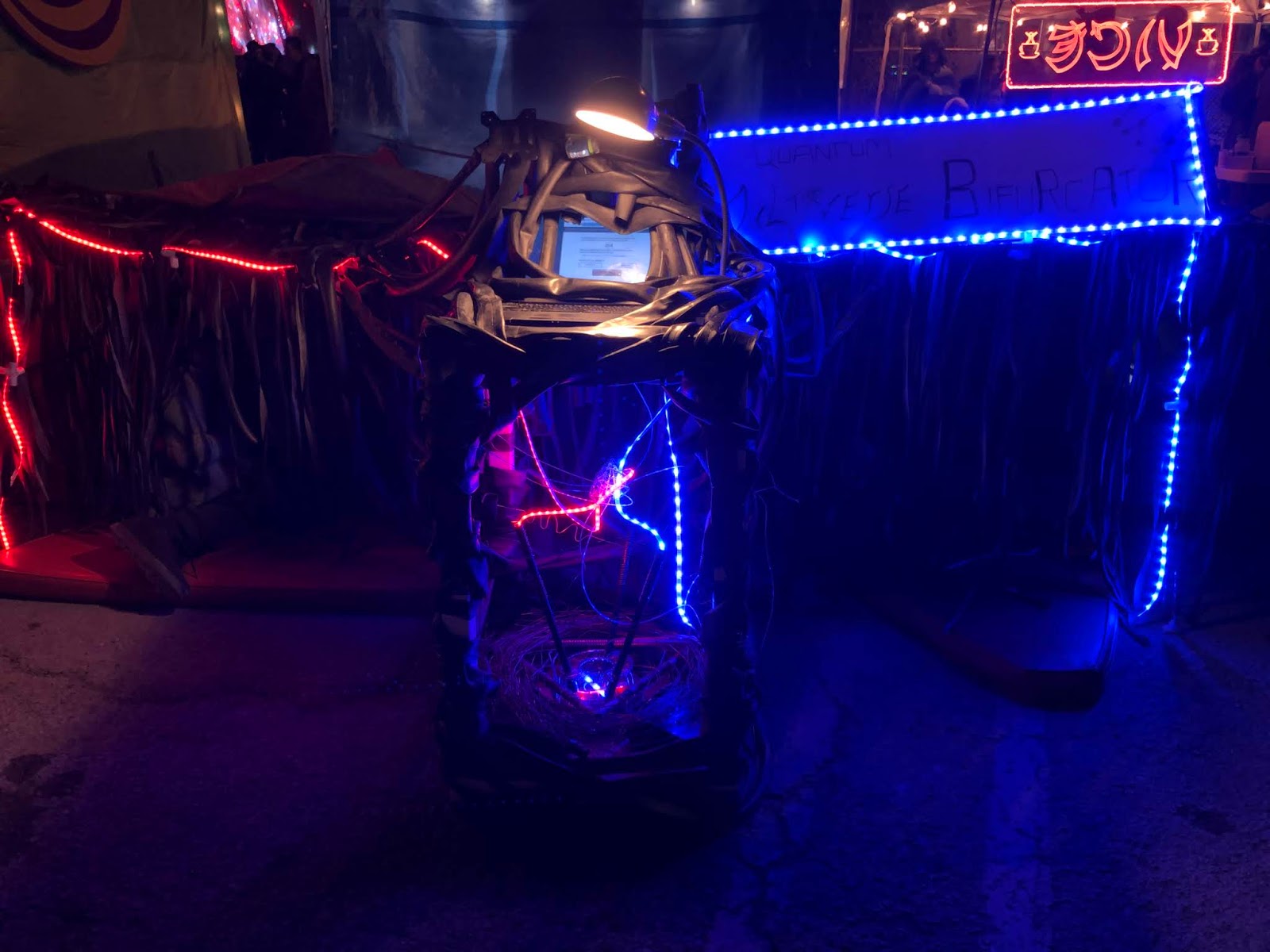 The machine inside also looked extra cool then too. 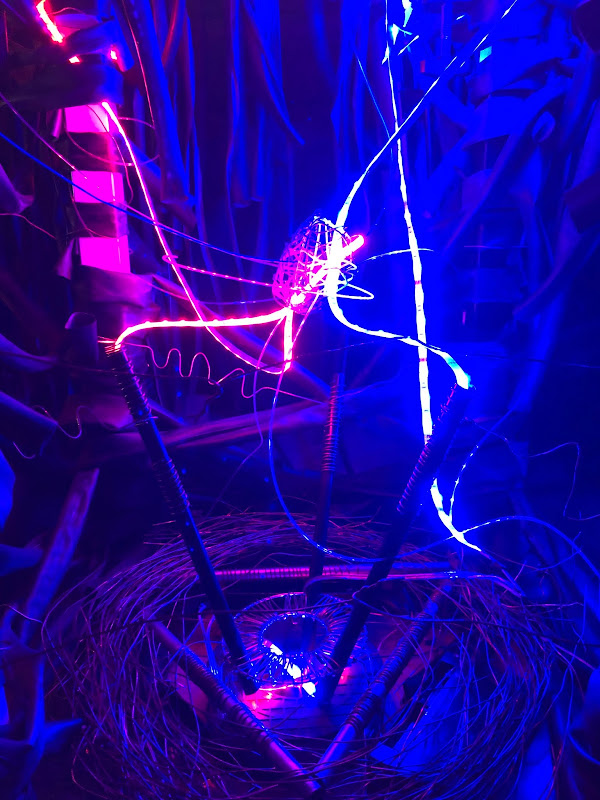 This installation was honestly the most fun thing I've ever built. My partner and I basically went through our whole house converting every miscellaneous item into something that could look vaguely sciency. But the best part of the build was getting to share it with the Burners at Decompression.

The whole point of the Bifurcator was to help us realize that our instantaneous actions aren't so very dire as we always think. I wanted participants to take a minute out of their busy partying to play with us in a glorified blanket fort. When the gates opened, lots of people started streaming past our camp. It was so cool to see people look at our weird little site. I could tell that they were curious to come over, intrigued by what they would find. But everyone's natural reaction is to pass by. I wasn't sure how to get people too engage with it until I came up with a cool catch-phrase that I could shout to the crowd to draw them in.

Want to play dice with the mother fucking universe?

I never could have imagined the feeling I would get from asking this question to strangers. The people of burning man ate this proposition up with relish. We had some amazing universe bifurcations take place. One person decided whether she should get married. Another person decided whether he should change the focus of his medical residency. Many people didn't want to share what they were deciding on, which is actually amazing. It meant that they were really taking it seriously. Even if this doesn't really determine exactly what they end up doing, it felt really good to pose the possibility that their choice really wasn't so monumental after all. That there could be a parallel universe that defuses their worries about what could have been.

I'm really grateful that Claire added logbooks to the tents so people could share their reflections. Most of them were pretty whimsical, but many people seemed to reach some profound personal insights. I'm honestly very proud to have offered them this experience.

This was my first experience bringing something fun like this to a wild, excited audience. This has caused me to reflect on the many paths my life could have taken up to here. I've loved to create, but I've always been afraid to share in a direct way. It's felt so forceful to demand people's attention, and I've preferred to just make things quietly with little advertisement. The Bifurcator is helping me realize that asking people to notice me isn't really such a burden to them, and that's allowing me to open up and send my creations out into the world more.

I've also been thinking about the philosophy behind the piece. It's not just about the fun or mystery of multiple parallel universes. I think it also speaks to the way scientific concepts are fundamentally highly philosophical in a way that we seem to ignore these days. These ideas can and should shape our understanding of our place in reality. It feels like as a culture we are compartmentalizing ideas and forgetting that science, art and and philosophy were really born from the same place. I think this can lead to a temptation to divorce ourselves from science, particularly in artistic communities, because science seems to try to belittle human experience. But I think that is just a superficial reading of the mundane parts of science, the parts of science that are commoditized, just like the parts of art that have been commoditized.

When I ponder trippy scientific concepts, I feel more presence of mind about what my human experience actually means. Is what I feel just a sliver of what holds together the reality I pass through? If we expand our feelings to include everything that every measuring device can understand, do we see a fuller world than we could have imagined? I feel like studying science and information theory has actually made me feel more like a branching, amorphous blob of thoughts, decisions, desires, and that all those immaterial patterns aren't solitary. They are stitched in with the rest of everything else in this twisted pocket of the Multiverse.

The reaction has fueled our desire to bring this to Black Rock City in 2020. By some astonishing coincidence the theme next year is actually the Multiverse so it seems like the perfect time for us to build it. I've started building a miniature model of how I want to expand the installation. In the next iteration, I want to focus on expanding the tents in the back to include a few more chambers that twist around and sometimes lead to dead ends. We'll expand out the front as well, to have a real quantum experimental system inside. 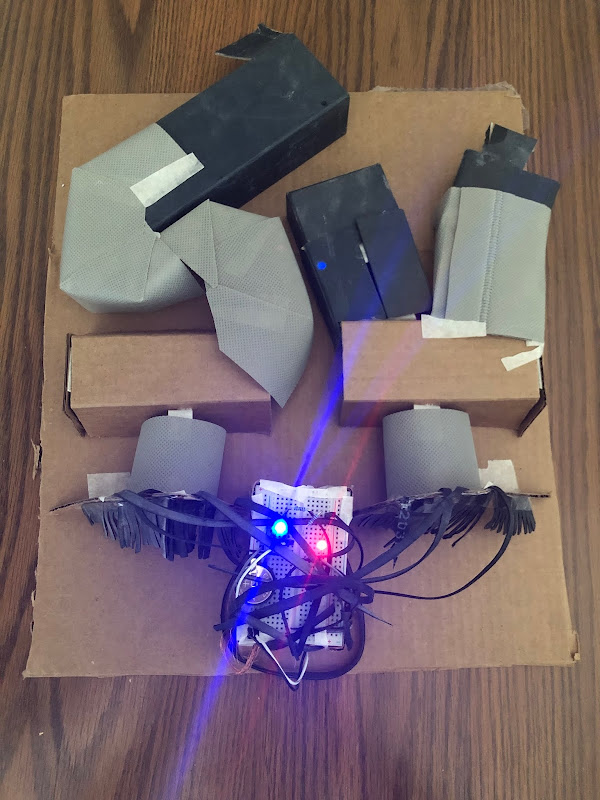 Inside the different chambers, there will be a variety of different interactions. Thus far, I'm planning on a projection of the double slit experiment, and some mirrors that produce a ghostly image of yourself in the other side of the multiverse. I also plan to leave in the logbooks so people can write their thoughts on their experience in the Multiverse.

To take this to the Playa will end up being a pretty major investment so I'm also writing a letter of intent for a Burning Man grant. To make things interesting, I think I'll use the QMB to decide whether I should submit it.