Claire and I have been refurbishing our sailboat this summer. Our top priorities were to replace our defunct head, and to reseal and treat our wood and recaulk the topside.

Soooo, I hate gasoline motors. They are loud and I don't understand them. As such, I'd been putting off fiddling with my noisy, fickle six horsepower Mercury four-stroke for a year. But neglecting things has a way of biting you in the ass.

The way my negligence got to me this time was in the form of a dead motor in the middle of the Coyote Point Marina channel on a busy, beautiful Saturday morning. My partner and I were dead in the water for about 10 minutes trying to row ourselves out of the way.

Eventually we got towed part way back into the harbor, and we were able to set up our backup electric trolling motor to get back to our slip. It was embarrassing to say the least. But it caused me to start the process of fixing the motor back up at least, so there's a bright side.

After checking that we had decent gas, we decided to change the oil. I followed along with this BC_Backwaters video. It's pretty straightforward after you find the drain nut. I refilled with West Marine's default SAE 10W-30 oil. 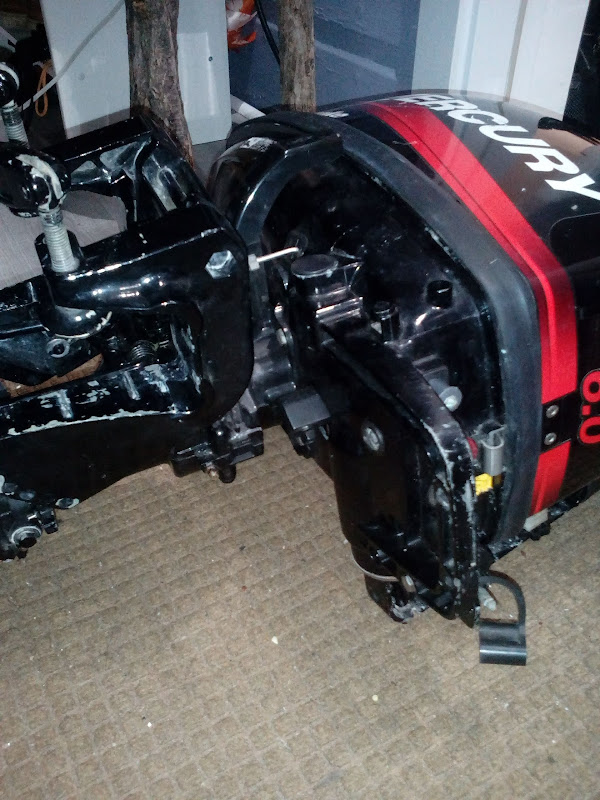 While this did make the engine sound a lot less crunchy, it didn't help with the popping noises from misfires. The engine kept cutting out, and actually we think it might have gotten a little worse.

I was a bit at a loss, but my friend Danny suggested the next thing we tried should be replacing engine filters and spark plugs. The old ones had gotten a little clogged and crusty. 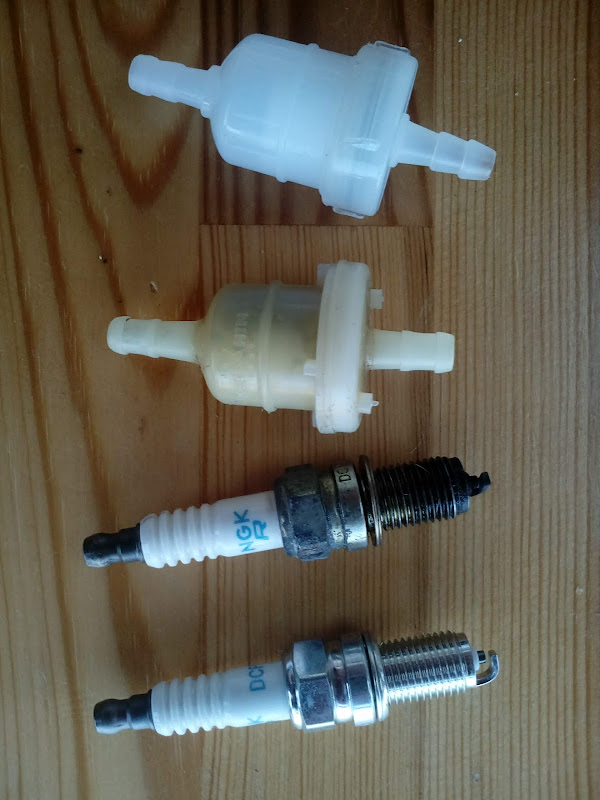 The motor definitely sounds better and it feels more reliable. Only time will tell how long it holds out. For the next fix, I suspect I'd repack the grease down the propeller shaft. But that will wait for another day.

It turns out the above fixes weren't the real culprit after all. Instead, it turns out the fuel line had become clogged with gunk. This resulted in the engine dying about a half-mile away from the marina! Fortunately, we were able to figure out that we could manually pump fuel into the motor by hand, which got us back. In the end, we just had to replace 6 ft of hose and the motor worked perfectly from then on. (knock on wood)

Claire's top priority (by a margin) was to replace the head. It seemed like it'd be a very dirty job, but it turned out to be not so bad.

We removed the old head and drained the old water tanks under the V-berth. Nasty water came out, but I was in my PPE. So it fine. 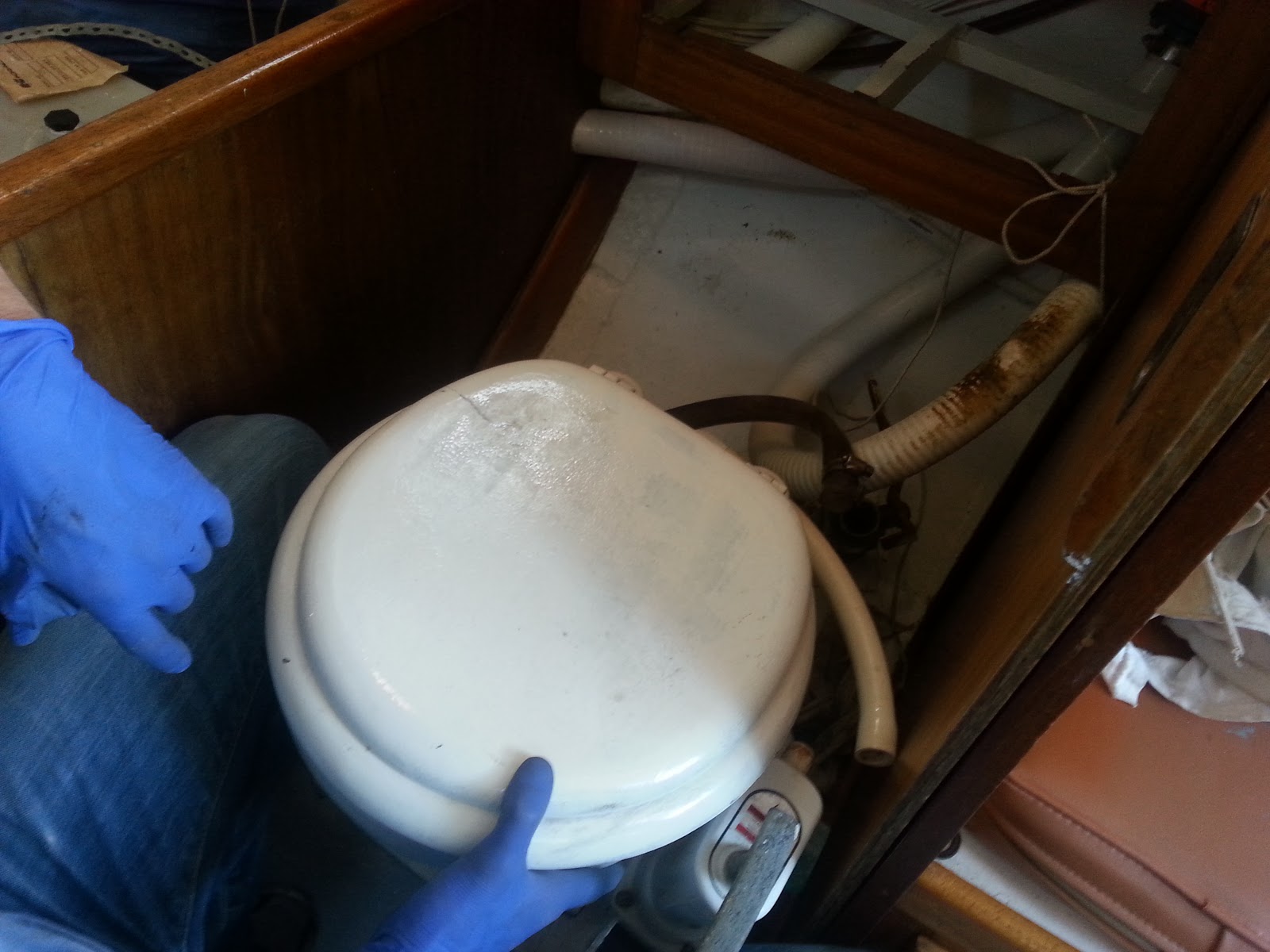 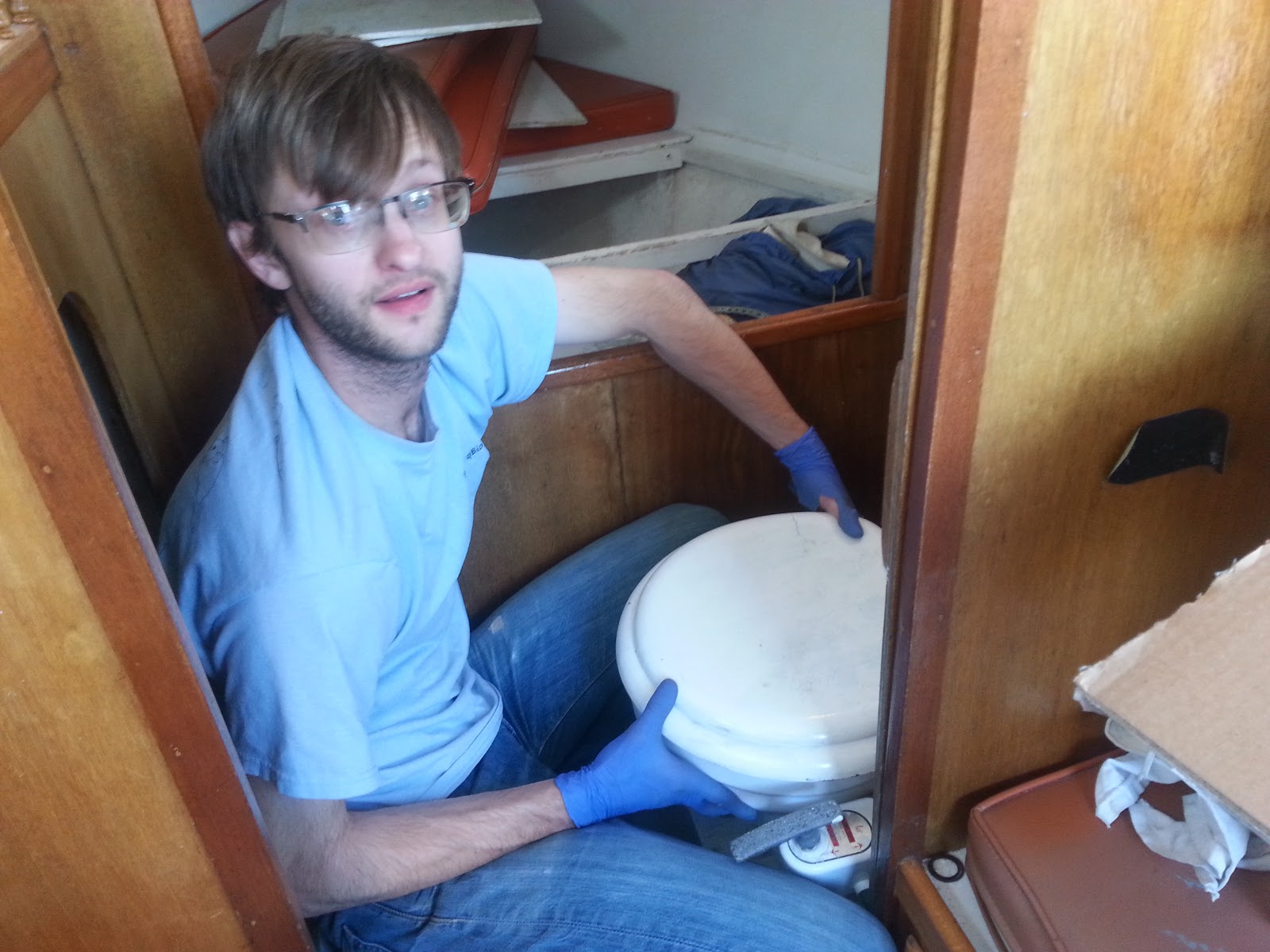 Extending the base and mounting the head

It turns out the replacement head I bought was actually a few inches larger than the old base. I'd thought I'd sized it correctly,, but it seems I was off by about an inch. Since the old base was looking a little rickety anyway, I decided to "augment" the base and extend it by a few inches to fit the new pedestal. 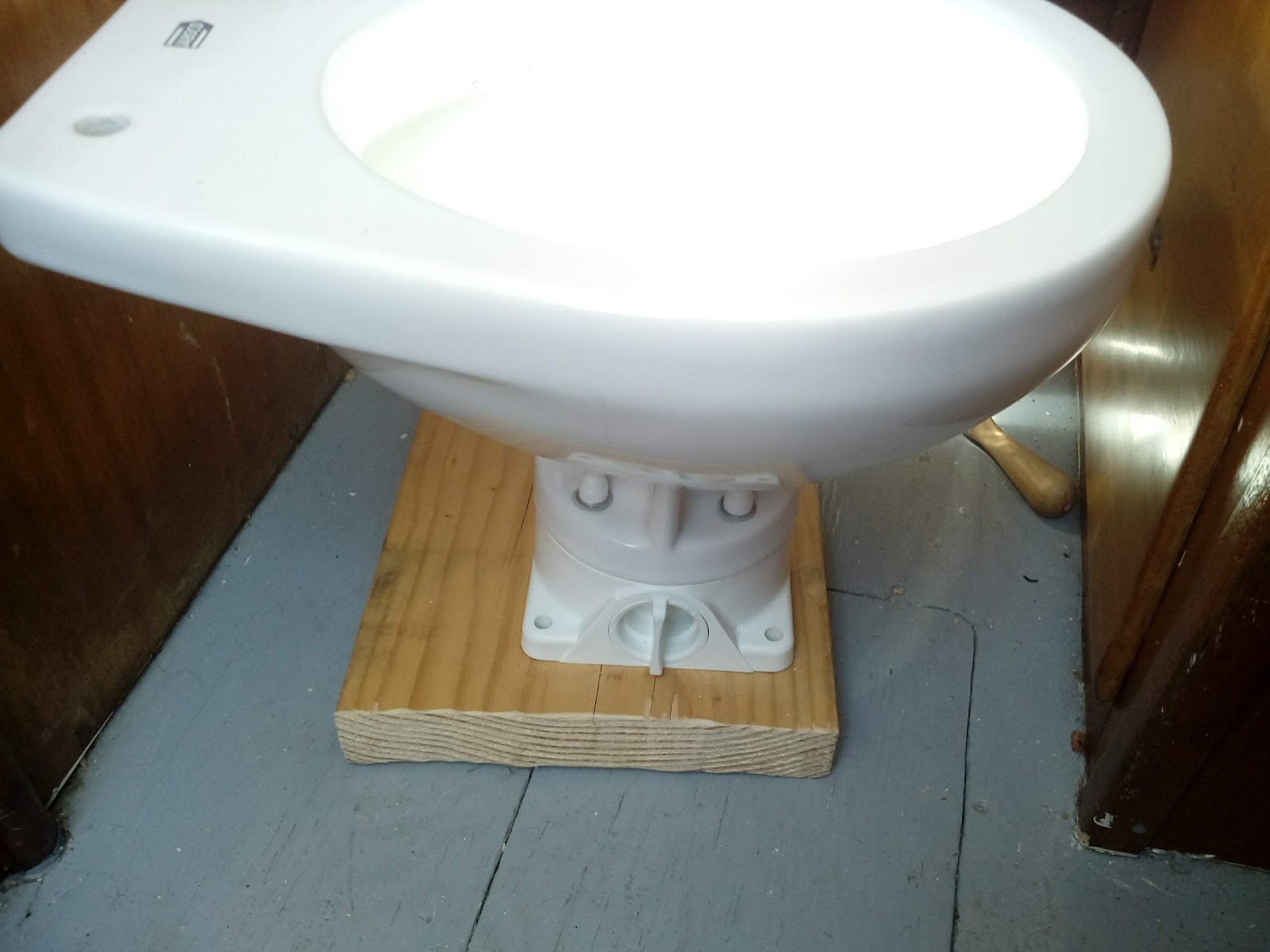 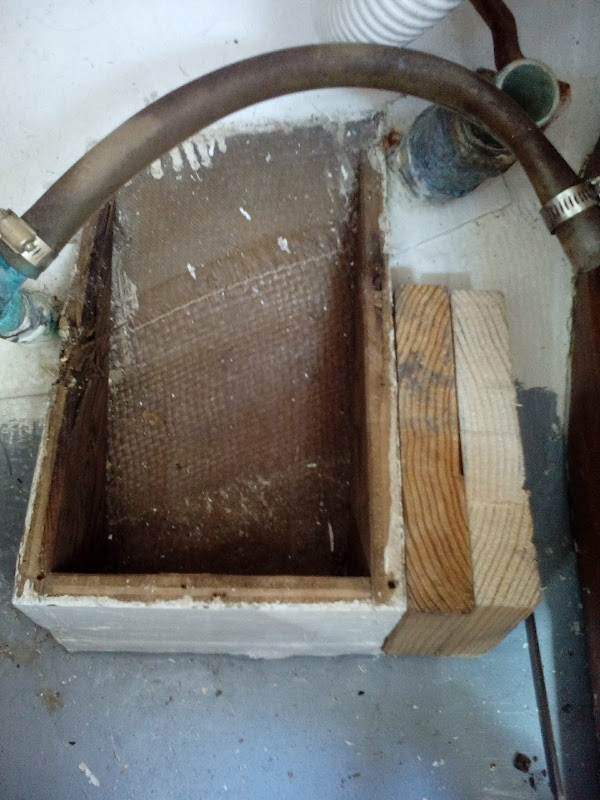 I mainly just attached two vertical 2x8s to the current vertical plywood, which was glued to the hull. I sawed the angle as best I could to fit the curvature of the inside of the boat. 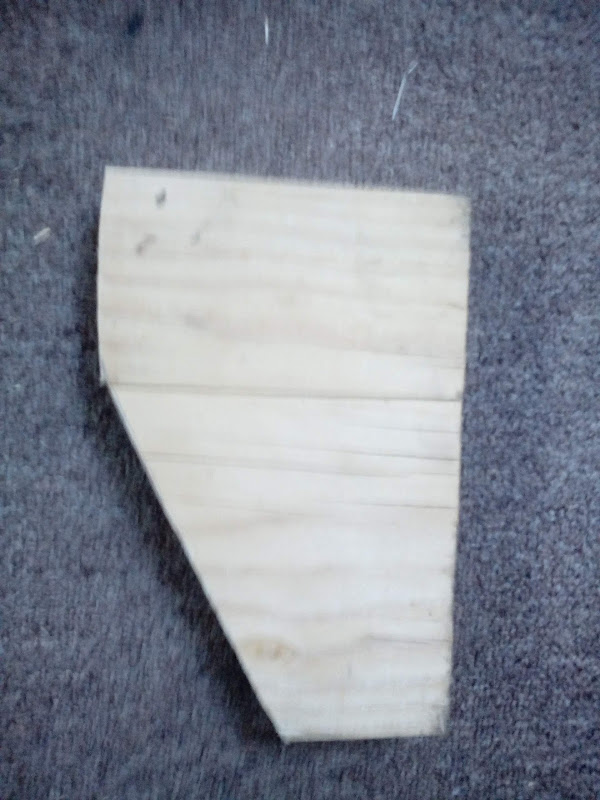 Then I added a board across the top for mounting to the base of the pedestal. 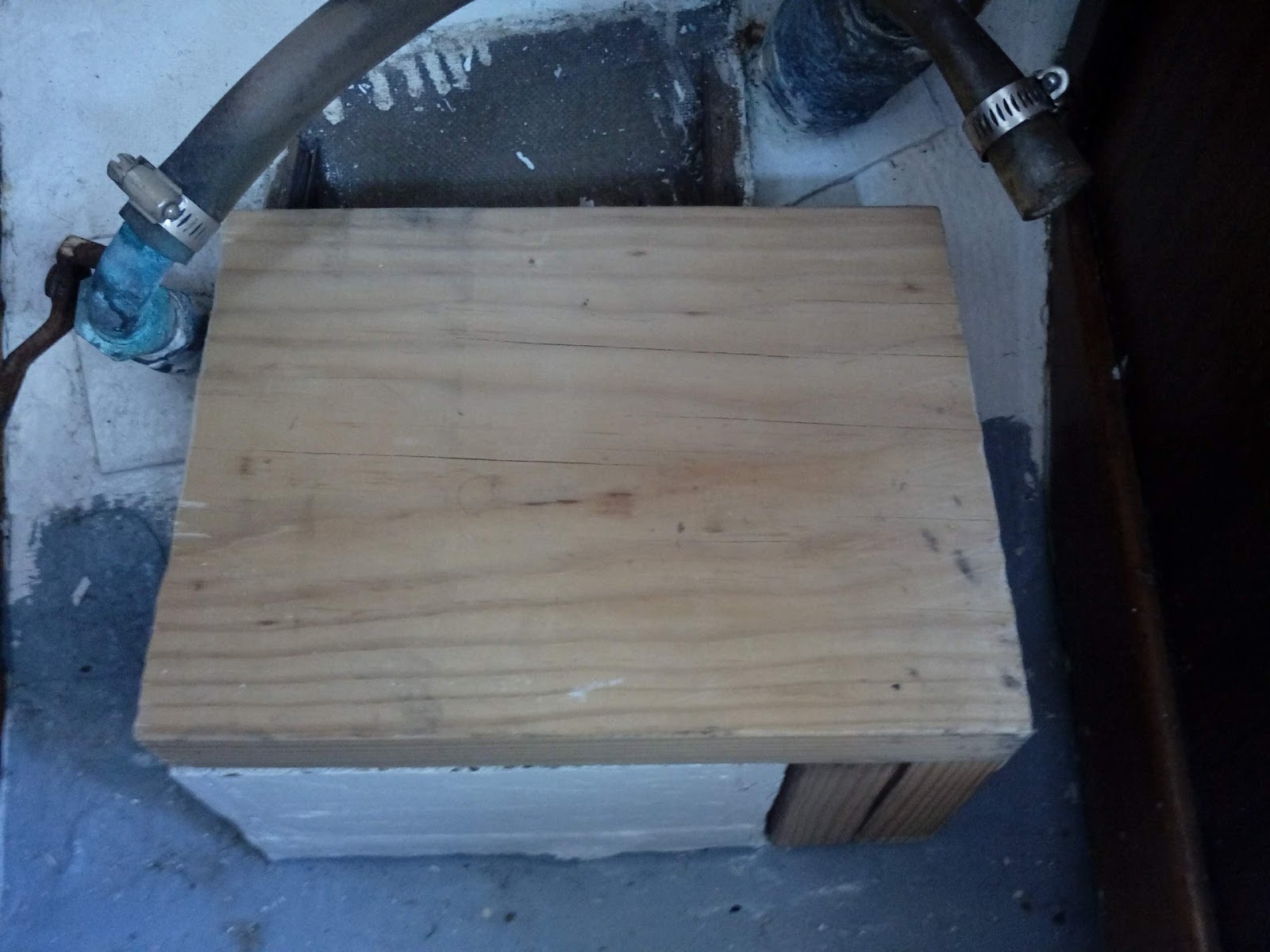 Bit of overhang, but at least it's secured now. 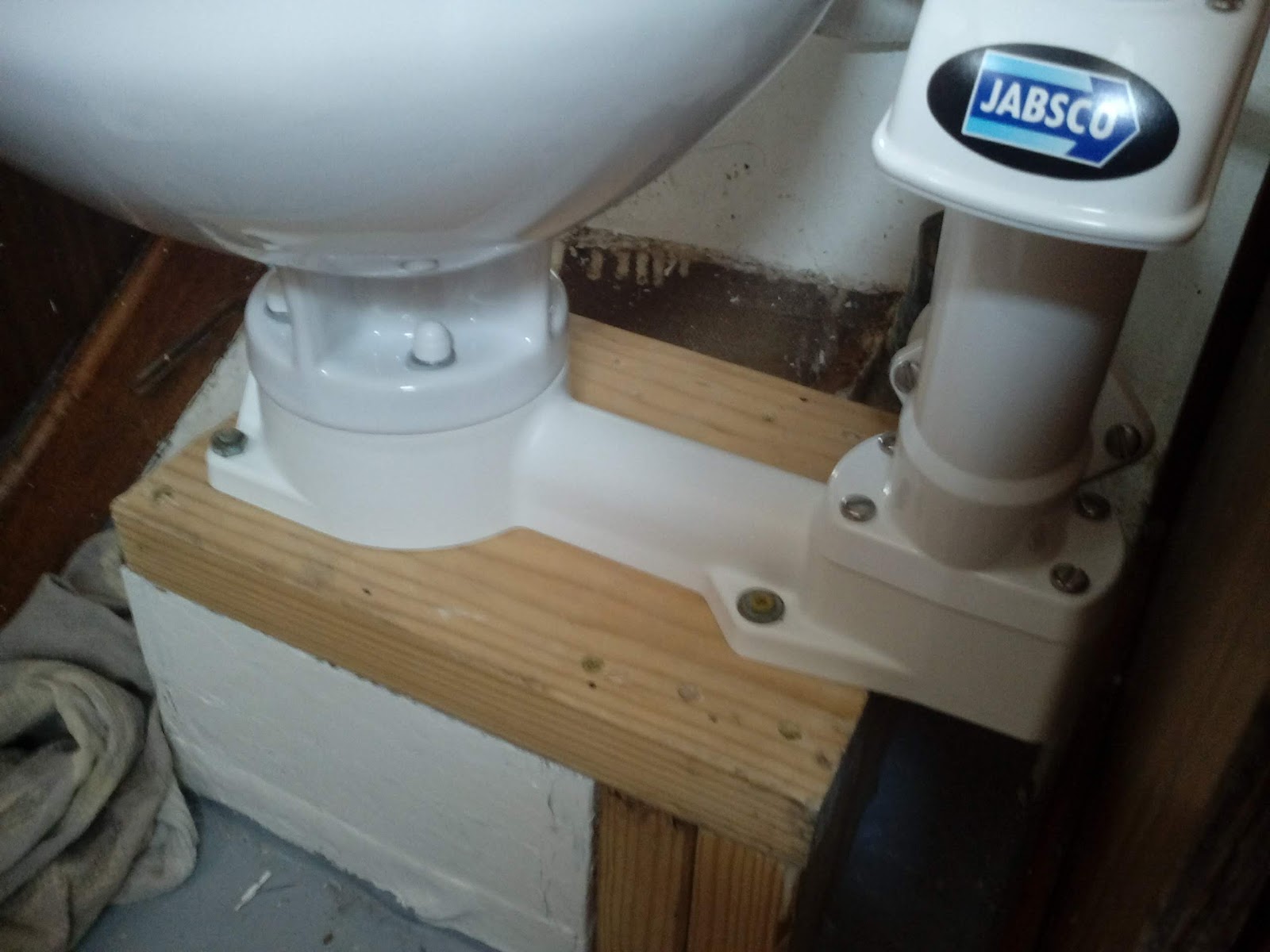 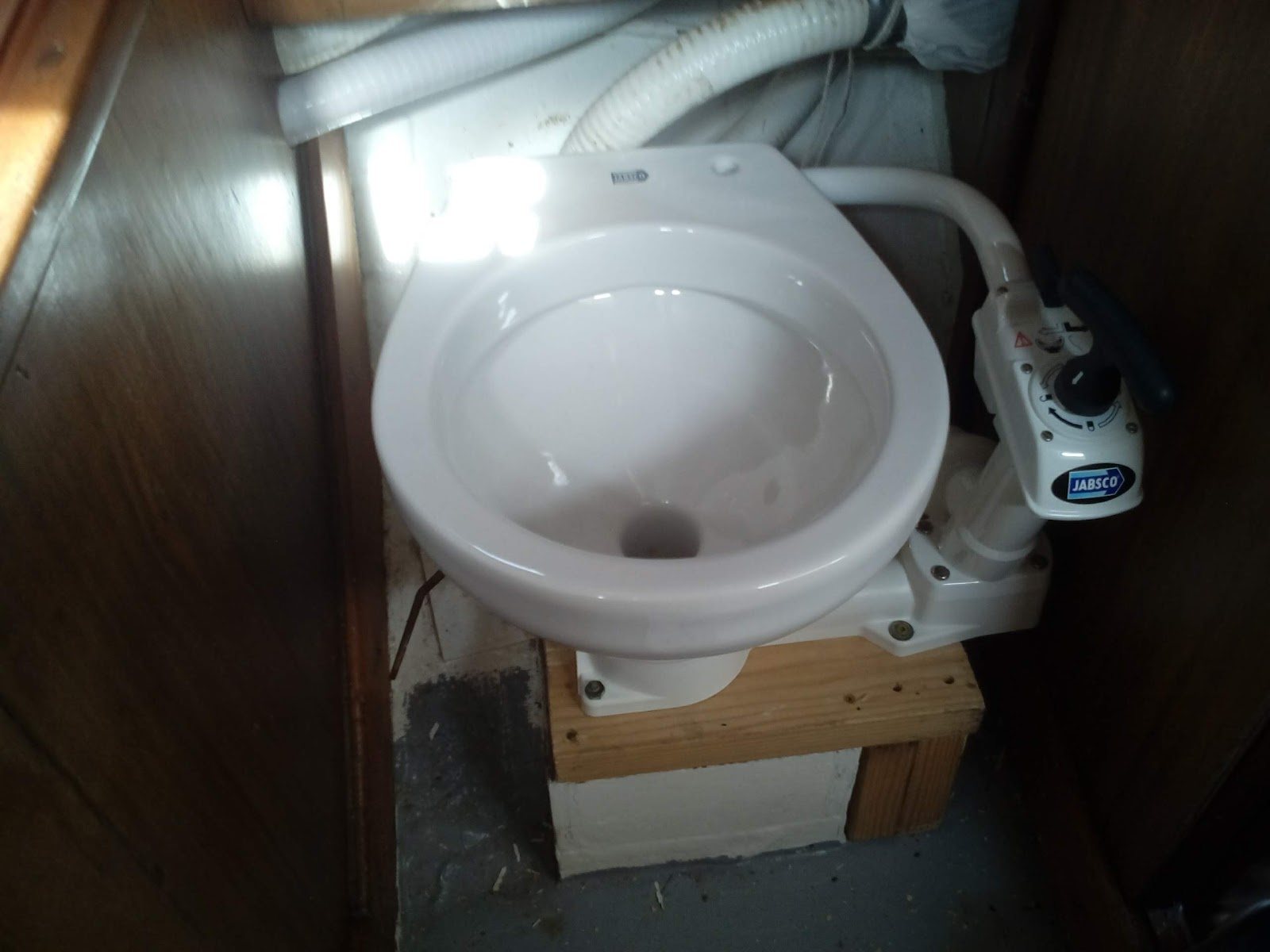 We ran into a bit of a snag when connecting the outlet. No matter how hard we tightened, there was still a tiny leak. Not acceptable when you are talking about piss and shit. So we added a tiny bit of our silicone sealant that we were using to shore up leaks in the topside woodwork. That seemed to do the trick (knock on vinyl). 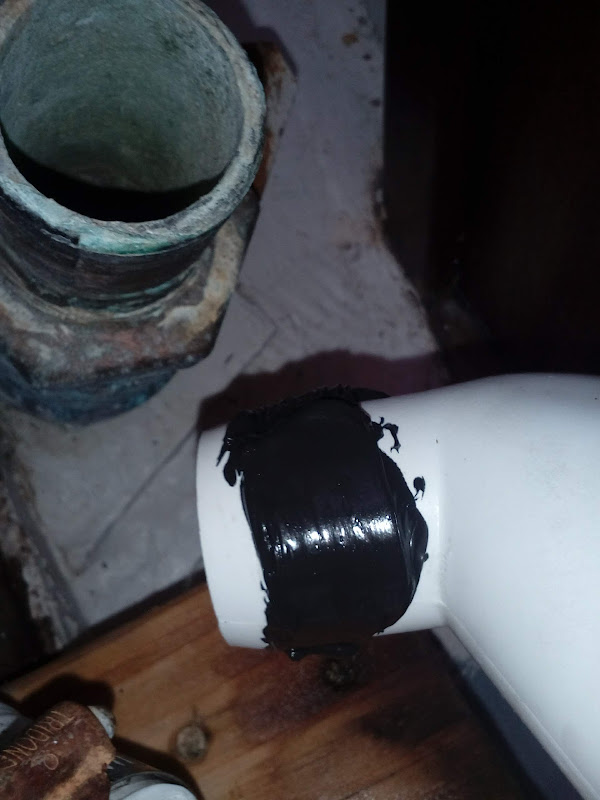 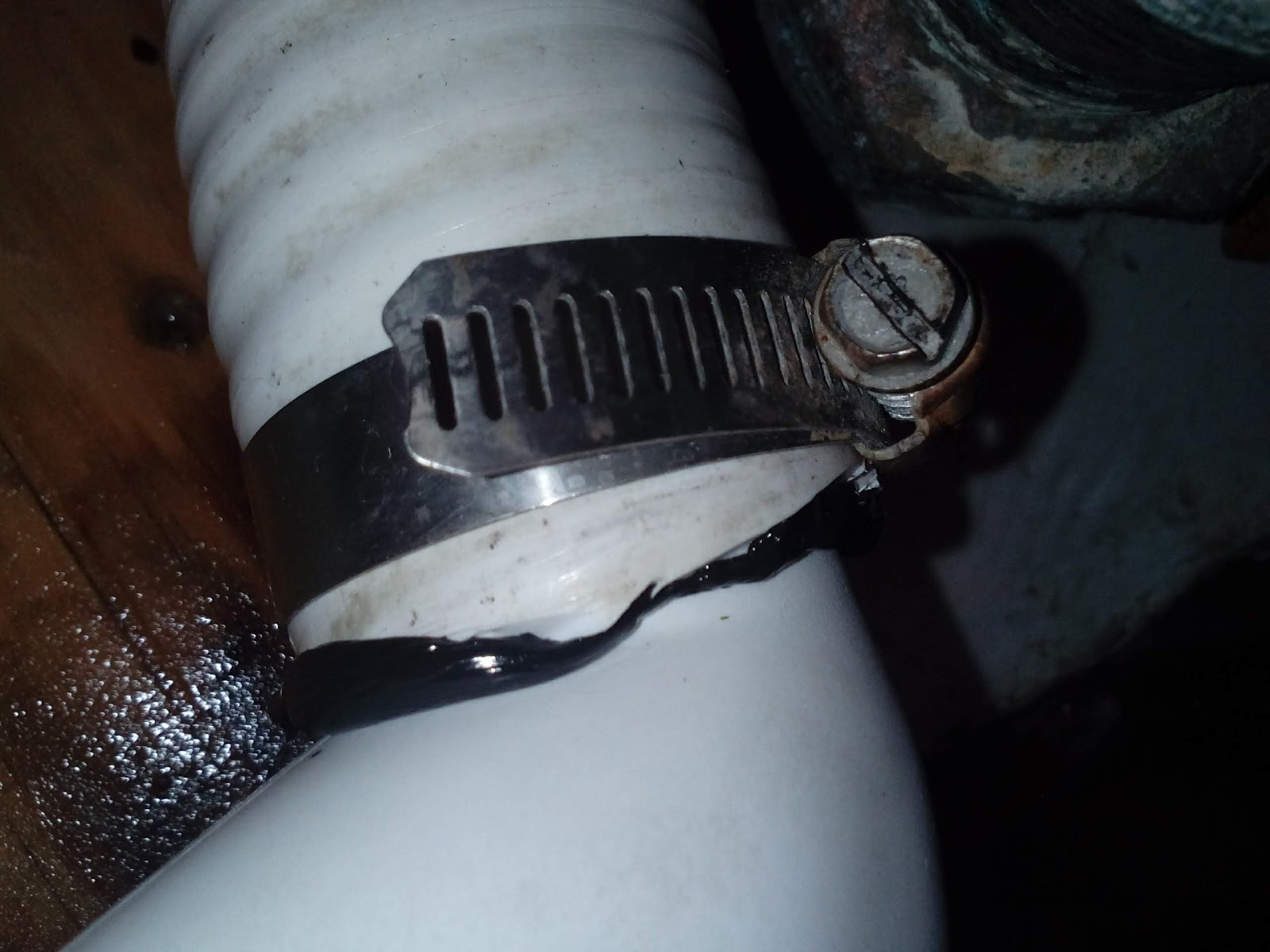 The last step was to connect the inlet of the toilet to a water source. Originally, the inlet came straight from the ocean through a seacock in the bottom of the hull. That made us a little nervous given the state of the seacock. 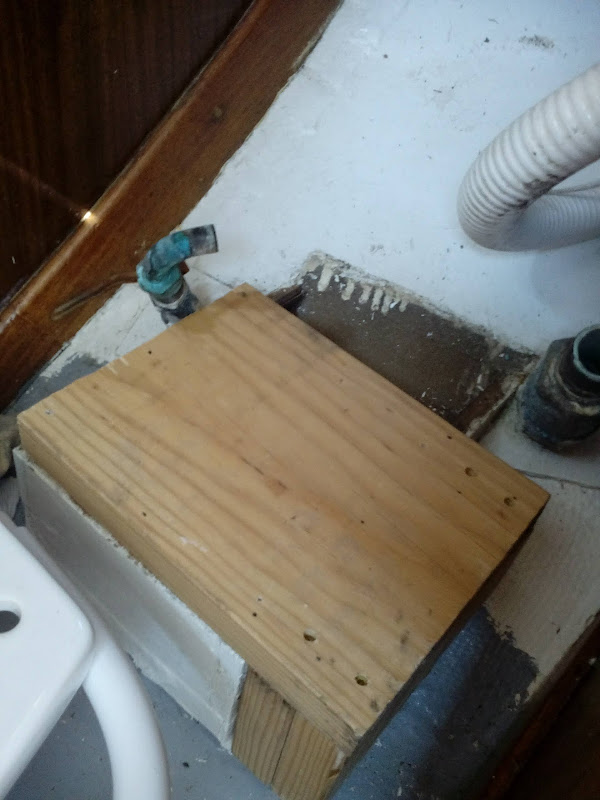 Instead, we're going to use the old potable water tank as a source. This will require getting more hose to reconnect the potable water tank that I'd previously removed. this project is going to hold off for a bit. For now, we are content to pour water into the top from a gallon jug.

The last thing we wanted to do before winter was get our wood back in decent shape. This was important because treated and sealed wood prevents water from getting inside the boat in the rainy season.

We started by resealing the wood with some black silicone that I got from a neighbor. We basically plugged the holes and hoped for the best. Application was messy, but we were able to apply and scrub off the excess after the fact. It's been keeping the water out as we wash it, but we'll see about winter. 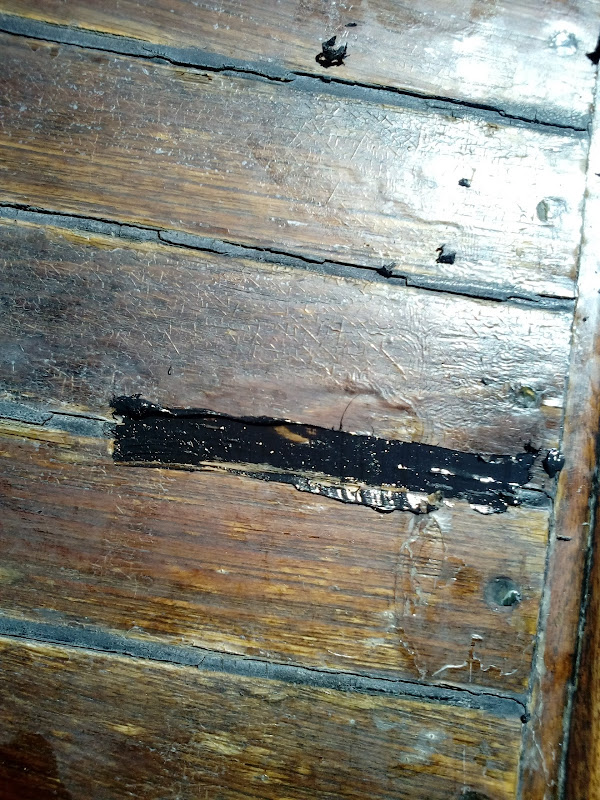 We also replaced the teak oiled all the wood. We were going to pull off the varnish and reapply, but that seemed like a lot of work. Instead, we just decided to let the varnish continue to wear away. We'll keep applying teak oil to keep the wood protected while the varnish wears down. In these photos you can see how he wood started with grey patches, which we'd clean and let dry to get it kind of wood colored again. Then we'd apply teak oil and let dry. 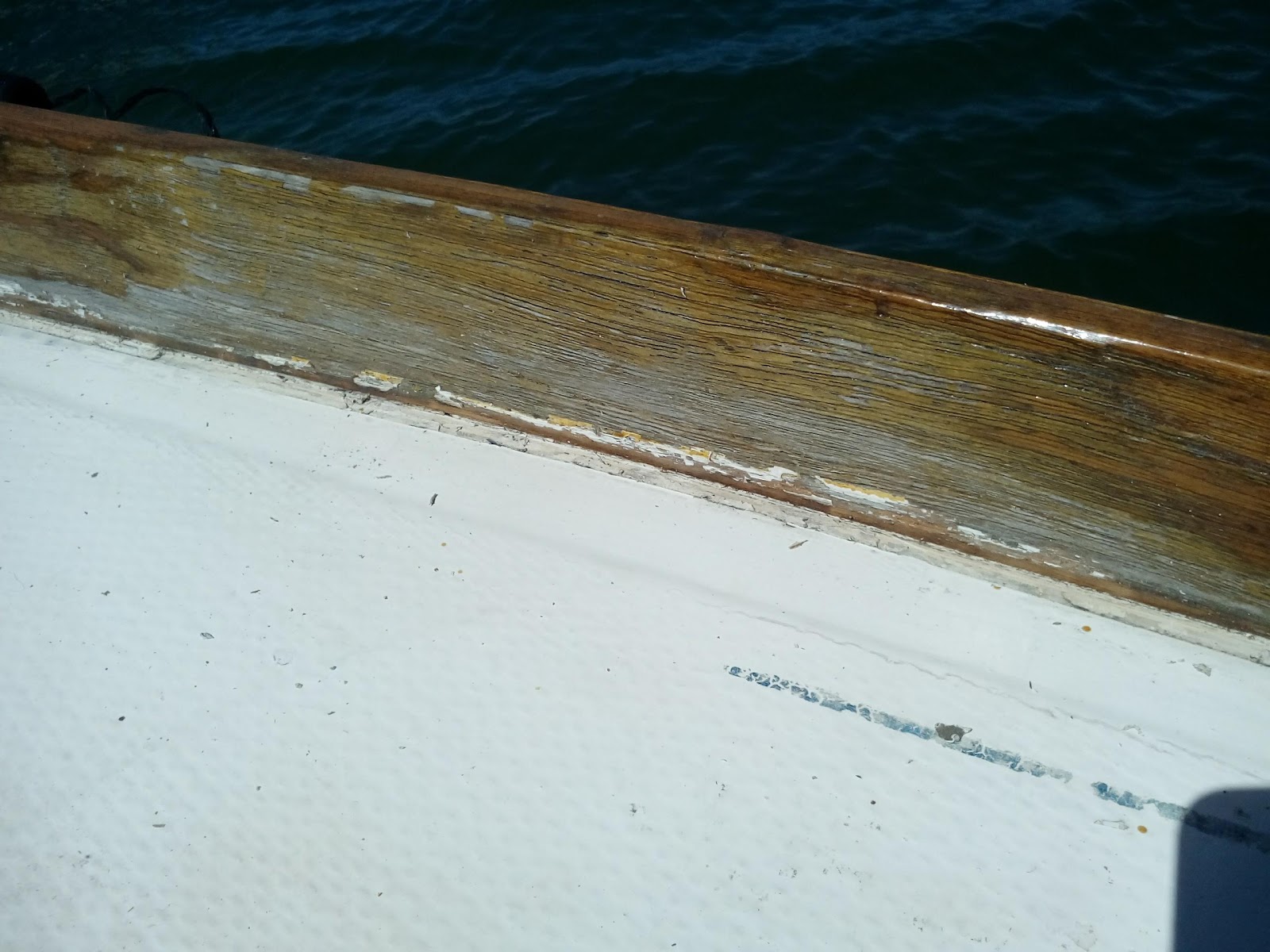 By the end, it looks mostly like the same. The main drawback is that the teak oil will often leave darker patches around the edges of any unfinished area. We're willing to accept this until the point when it's really worn down and we can clean and sand everything to get a nice bright finish.

It turns out caulk is actually pretty tricky to apply. I used masking tape to clearly delineate where the edges of the caulk should be and applied a liberal amount over the top. To smooth and round the caulk (before it dries), I came up with a homebrewed method where I used a rounded piece of wood to spread the caulk with a smooth circumference. It worked OK in most places. I pulled the tape while the caulk was still wet, but there was already some sticking in places. 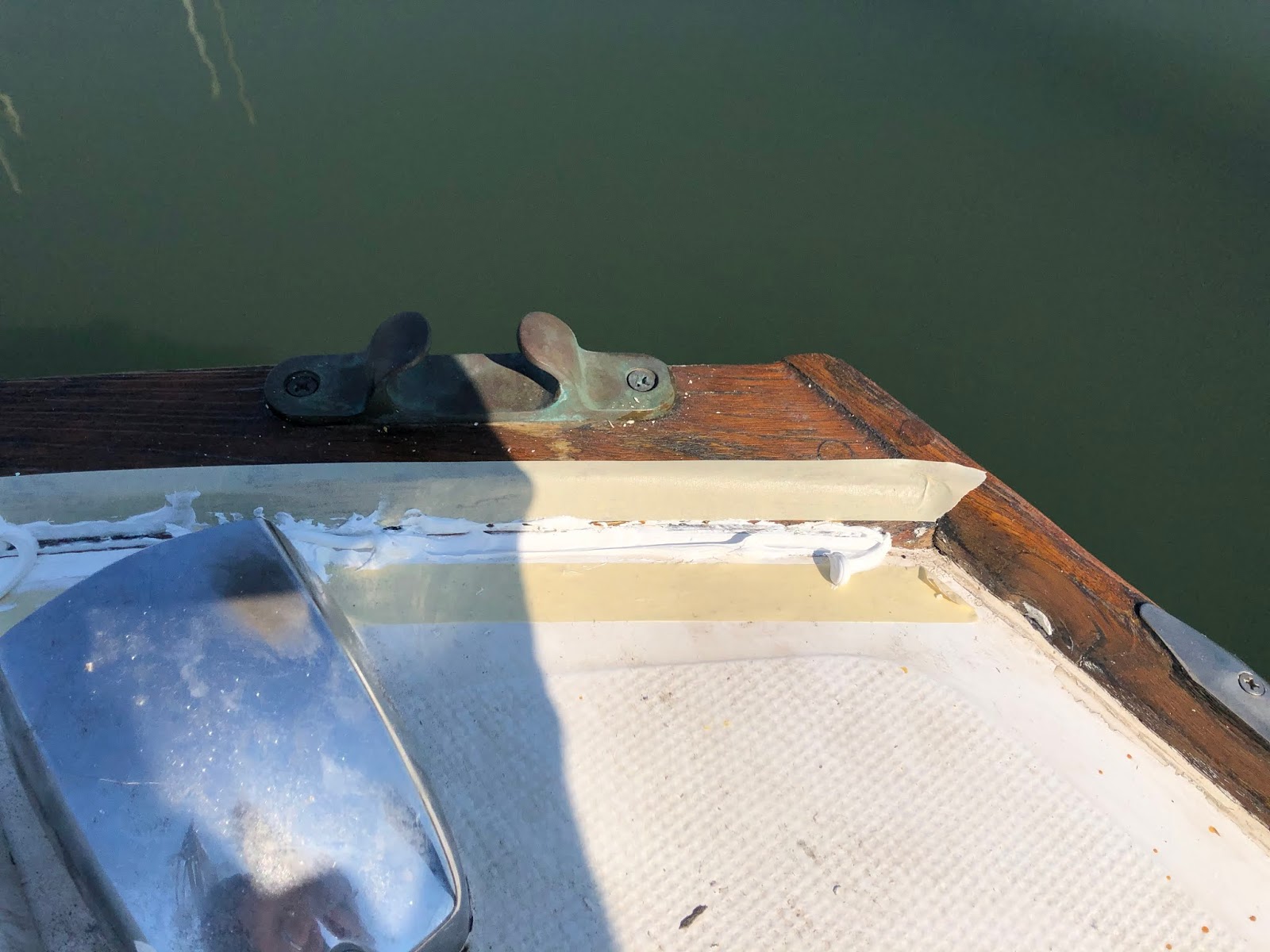 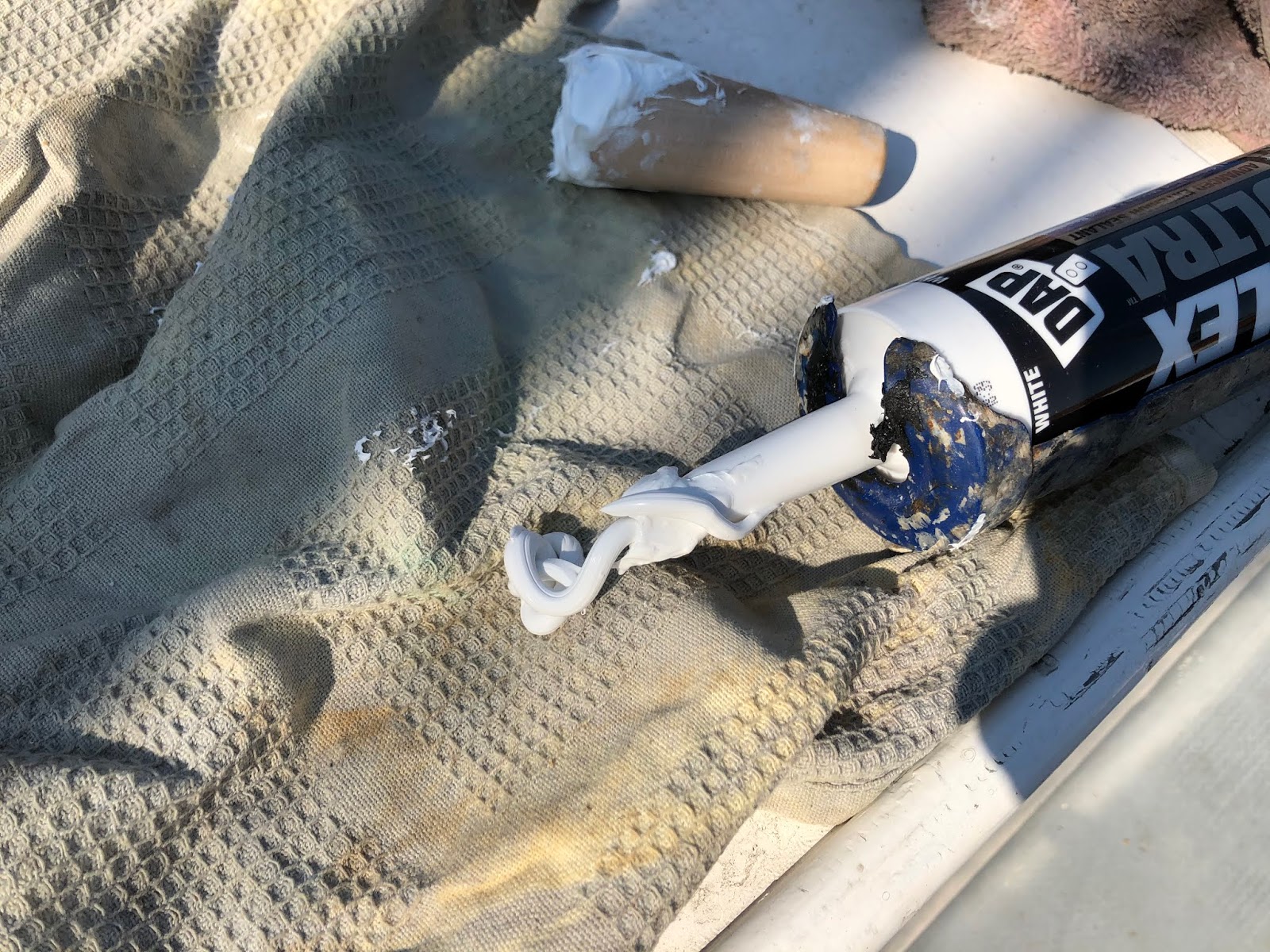 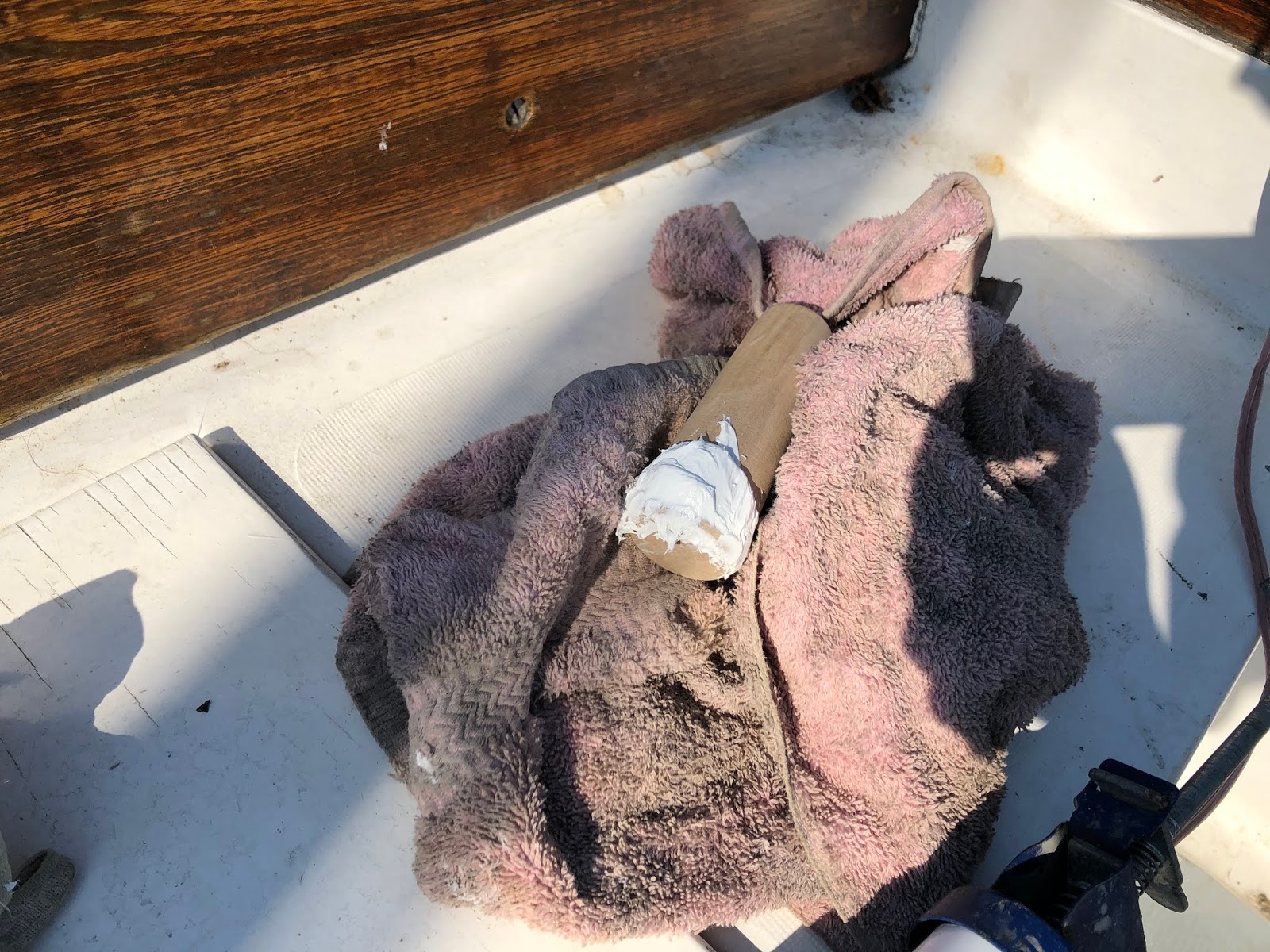 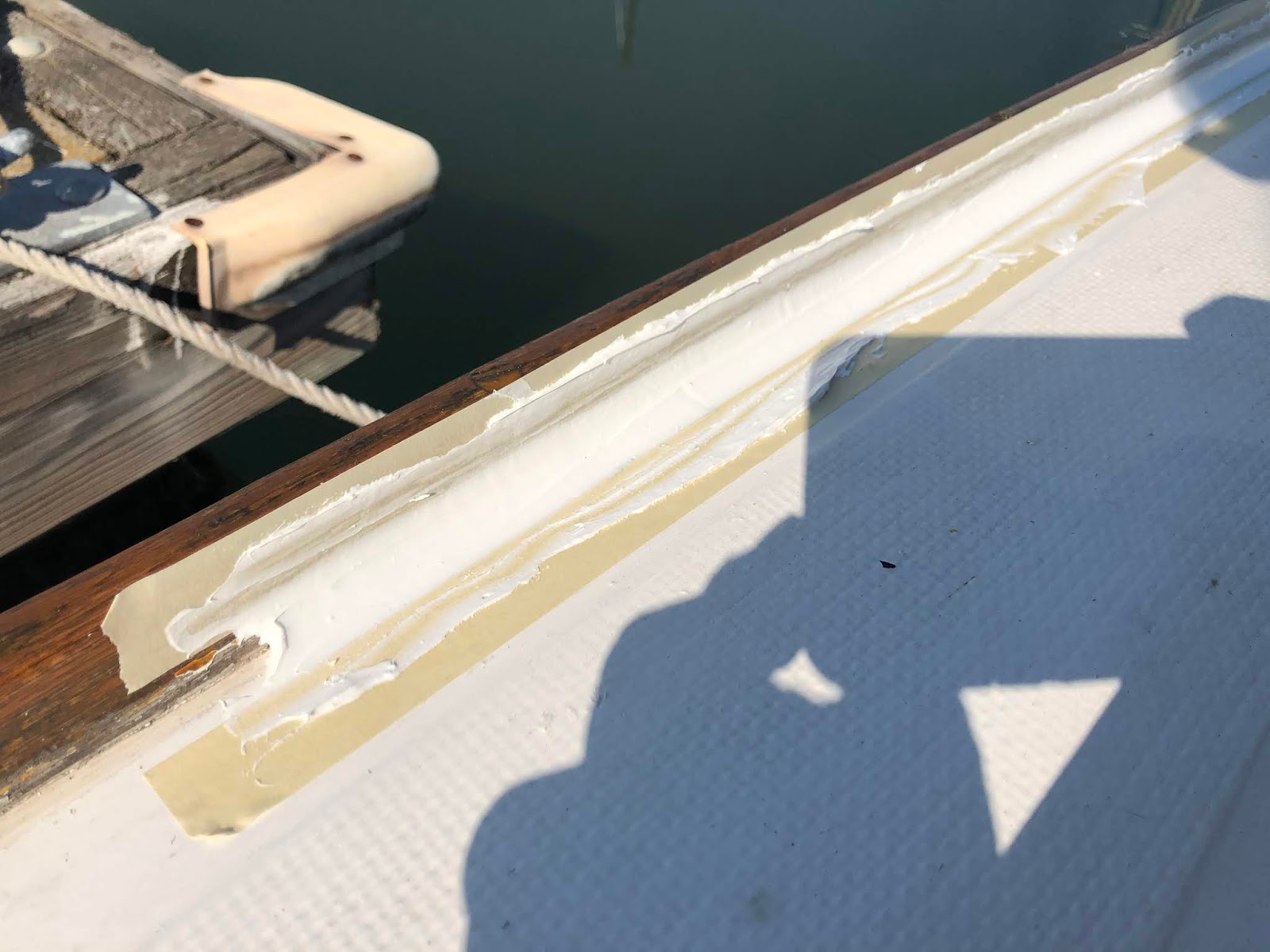 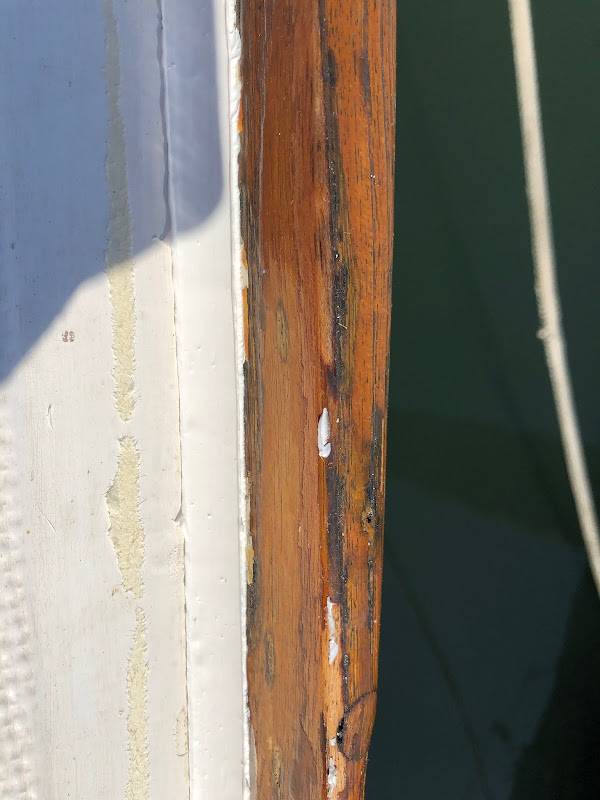 The caulk gun makes a bloody mess, and I was a little late in patching up some areas. I may need to redo a it of this project in the near future.

We also found that some of the interior wood drawers were starting to tear apart. I just wood glued and screwed it all back together. Simple fix, but makes it a hell of a lot more livable. 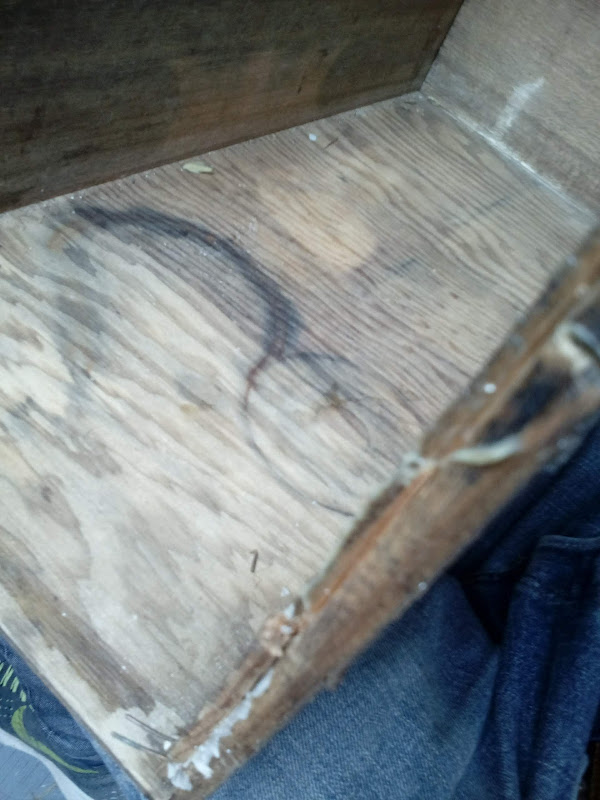 In a previous post, I described how much I like keeping track of my expenses, particularly for hobby projects like this. The overall cost of all this was around $250 for the toilet materials, and about $200 for the caulks, the oils, PPE and other miscellaneous tools. This seemed pretty great since a quote from a boatyard was for 3x that for each. Plus, I gotta admit, I feel closer to Ioni every time I work on her.