Epistemic status: It should go without saying that I don't have any certainty about the fundamental nature of the universe. This is just a bit of conjecture that gets me through my day.

As I moved from physics to biology and now into machine learning, my worldview has shifted from one focused on material reality to one that deals largely with abstractions of information. I've thought a great deal about these two viewpoints and wondered about their relationship. Importantly, as I've interacted with people ensconced in these two fields, I've noticed a tangible difference between two distinctive mental models of the fundamental space that things occupy.

So which is correct? I've thought a lot about the relation between our material universe and the idealistic universe, and as with every other ethical or epistemological dualism I've seen in my life, the answer may be just the most boring: both. It seems to me that the very thing that makes our universe an interesting one to inhabit is that the two spaces coexist and are intermingled. And perhaps, the very validity of our consciousness is predicated on the comingling of these two spaces.

To describe this third "necessary combination" view, I've had to develop what I believe to be a new description of the way that entities exist in this third space interpretation of the universe. I've called this new construct an identifield (pronounced identi-field), and I'd like to take the rest of this blog post to describe the idea.

Identifield is a shorthand term for an information identity spacetime field. It is a means for articulating how a thing of information (ie platonic ideal) exists in the material world (ie in physical reality). To look at an identifield is to look at how an idea fits into the evolution of all ideas spread across physical time and space. That sounds a little extravagant, but once it's broken down, I think it isn't totally crazy.

So if you were to try to imagine where that information lives at all times and how "strong" of a residue of the information is present, you'd have to picture a 4D spacetime field occupying all the places we just mentioned. That's an identifield.

If the craziness above wasn't enough for you, here's a little more explanation. Lets break down the defintion of identifield, information identity spacetime field.

We can tackle identity in a similar way. I like to use a definition of identity that hybridizes the philosophical definition with our more intuitive understanding of personal identity. So for the sake of this discussion let's say that identity is the combination of all those aspects of a thing that make it that unique thing in and of itself. So your jacket's identity is all the things that make your jacket, your jacket and not somebody else's.

All of this is overwhelming to picture in the moment because there are some people navigating to and from the page, reading, forgetting, and discussing, off and on all the time. For me, it helps to broaden our imagination of information existing in all points in space and take it one step further. We imagine not just where that information is at this instant, but where it has been at all points in time.

To imagine this, we turn to a concept from physics called spacetime. If you are unfamiliar with the idea of spacetime, I've written a short visual explainer to give some background. But for those who are familiar with the concept, you will recall that spacetime allows us to project a single physical object, like a bowling ball, simultaneously to all points in space that it will ever occupy. This turns compact objects into extruded ones such as the one in this illustration. 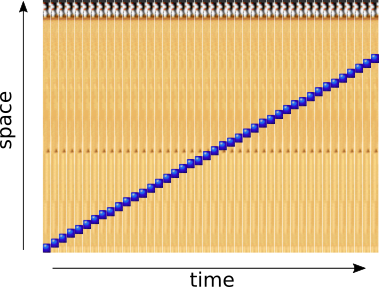 We can think about what happens when we start replicating information. For example, imagine my friend wants to come over and copy a flash drive. Well if you looked at some information identity housed on that flashdrive in spacetime, you'd see it would look like a single tube at early times (like the bowling ball) and then suddenly it would split to become two tubes that snake around independently.

We're mostly familiar with fields in physics like gravitational force fields and elecromagnetic fields. But any quantity that varies in space can be described as a field. We can talk about the temperature field to describe how temperature varies throughout a house (warmer by the sunny windows, colder in the basement). We can even talk about more abstract things like an "intelligence field" that quantifies how intelligent the entities in one region of space are. For an intelligence field, parts of the world occupied by humans have a high value, parts occupied by slugs have a lower value (presumably) and rocks would have even lower value.

Taken together, these elements allow us to visualize like in the example below. For more information on the visualization see this post. 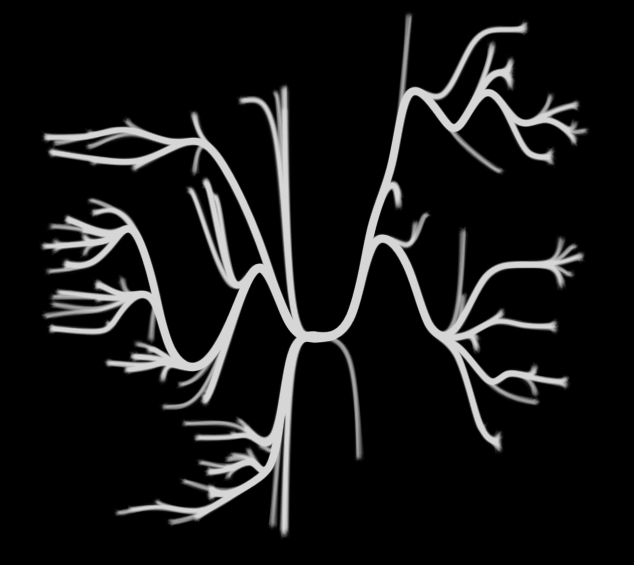 The continuous nature of the identifield allows us to get away from the necessity of drawing hard demarcating lines for where two similar ideas diverge. Although this notion is necessarily abstract, there already exist many ways to compute the similarity of two pieces of information. The identifield does not predicate a single metric that need be used for measurement of similarity, only that some measurement exists and that we may assume many small perturbations will continue to change the measurement in a continuous manner.[*]

The purpose of framing the identifield is to aid in thinking about how ideas exist in the real world. Once you begin to imagine information identities existing in 4D spacetime, it's hard not to start thinking of the whole world in terms of this construct. I think there are at least three significant application areas of the identifield that could help us see the world with slightly greater clarity.

You could imagine that some things are compact in the space of ideas, but sprawling in physical space. At the same time, certain philosophies could cover wide swaths of idea space, but only exist within the mind of a single meditating monk. Including the identifield in our vocabulary allows us to more clearly see that distinction.

I believe the most interesting implication of the identifield is what it means for our dearest information identity, our self. In my mind, I now see myself as composite identifield, processing and transforming all sources of information that I have absorbed. This is a sizable idea to unpack so I have elaborated in this post.

Intuiting meaning for the universe

I am currently writing at length about my interpretation of a meaning for the universe. The key takeaway (argued elsewhere) is that if (1) you are concerned with the outcomes of your actions and (2) remain unsure how specifically to act, it can be deduced that (3) you should assume that the universe falls into the class of universes with a purpose that can be discovered by intuition. The argument is long and complex so I encourage reading my reasons articles if you are curious.

Unfortunately, I do not have a way to prove which of my intuitions is correct. However, I've personally found it useful to use the mind-broadening effects of contemplating things as identifields to hone my intuition on the relation between my immediate action and the space of outcomes in the universe. This is only an intuitive connection, but it's one that personally holds meaning for me so I thought I should include it in this list of implications.

Unfortunately, there is no concrete conclusion offered by this framework. In fact, the identifield construct posits specifically that so long as you are thinking about even part of this idea, the idea does not conclude at all.

My website is my attempt to catalog the identifield of all the (useful) information that passes through Will Stedden. This particular identifield, is what I've called the bonkerfield (an identifield that is perhaps a little bit bonkers). If you take the information identity on this site with you and it informs your life, then you become a part of its identifield. And bonkerfield becomes a part of you.

...and if you share your thoughts with others in the comments, then well, it makes it much easier to watch the identifield forming :)

A note on continuity and sizes

All of this assumes that there is some granularity of space and time over which we will define a piece of information as coherent and allow changes between two discrete states to blur. For example, if you delete a few words in a paragraph and rewrite them, the identifield of the paragraph in that interim should not be meaningfully modified.

A careful observer may try to punch a hole in the physicality of the identifield by noting that physical fields are normally defined at arbitrarily small units of space. They will point out that to define a space as containing information you need to create some envelope with a macroscopic spatial scale. I agree that is necessary. However, that is not a problem as it should be noted that temperature and many other quantities that are commonly considered fields do not actually exist on an infinitesimal scale.